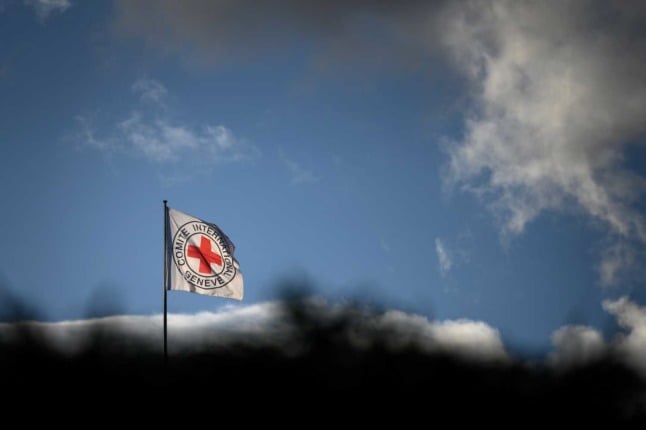 A flag of the International Committee of the Red Cross (ICRC) flutters in the wind on the top of the humanitarian organization's headquarters in Geneva, on September 29, 2021. Image: FABRICE COFFRINI / AFP

Numbers are increasing rapidly, with the United Nations on Tuesday estimating that more than two million people have fled the country, with countless more displaced internally.

A support package totally eight million francs has also been made available to various aid organisations.

Switzerland on Friday announced it would activate the ’S-Permit’, which facilitates emergency protection.

The S-Permit allows people to live and work in Switzerland for a year, with the possibility of extension.

The S-Permit was created after conflicts in the former Yugoslavia but has not yet been activated.

Ukrainians are otherwise permitted to stay for 90 days without a visa in Switzerland.

More information about the permit is available here.

There are also coordinated efforts at a cantonal level. Zurich on Tuesday set up a reception centre at a military barracks near the main train station.

Refugees will be supplied with emergency aid, including clothes, tickets and cash.

Just days after the initial invasion, Swiss transit networks announced anyone fleeing the conflict could travel free on long or short-distance trains.

On March 9th, Switzerland announced anyone transporting refugees would not need to comply with the vignette rules.

A number of other Swiss companies, including mobile phone networks, have announced a range of changes to help those fleeing conflict.

Free transport and calls: How Swiss companies are helping Ukrainians

How many refugees from Ukraine can Switzerland take in?

With an estimated 6,500 Ukrainians living in Switzerland, there is also a considerable capacity for people to take in those fleeing the conflict informally.

On a formal basis, as at Tuesday morning Switzerland had set up 5,000 places in asylum centres across the country.

So far, 847 refugees have already been placed there.

In addition, more than 11,000 private individuals have volunteered to host refugees in their homes, amounting to an estimated 31,000 beds.

Anyone wanting to take in Ukrainian refugees at home can put their name on the following list.

The exact number of Ukrainians expected to come to Switzerland will be known in a few days, but the government has already indicated they will be eligible to obtain a right of residence without having to go through an ordinary asylum procedure.

“The Swiss Refugee Aid Organisation will coordinate these offers and place Ukrainians with private hosts or in cantonal structures, in close cooperation with the cantons”, State Secretartiat for Migration (SEM) said in a press release.

More information on how Switzerland is helping Ukrainian refugees is available at the following link.

READ MORE: How Switzerland reacted to Russia’s invasion of Ukraine – and how you can help