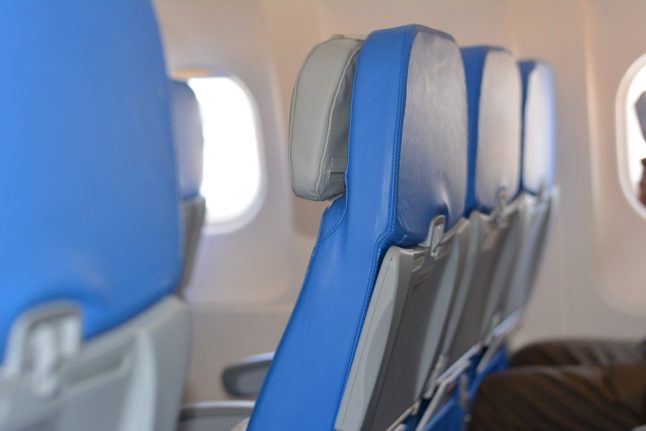 Drinks and peanuts are not included, but think how cool this seat will look in your living room. Photo by Pixabay

More than 3,000 Ukrainians have received S status since Saturday

The Federal Council decided to activate this special status starting on March 12th. Since then, the State Secretariat for Migration (SEM) has granted it to 3,117 Ukrainian refugees.

Up to 60,000 Ukrainians could seek refuge in Switzerland, according to Justice Minister Karin Keller-Sutter.

The S status means Ukrainians can stay one year in Switzerland without having to go through the asylum procedure, and are allowed to work, as well as go to school, while here.

“A gainful activity is essential for people on the run to be able to participate in social and professional life and gain financial independence”, Keller-Sutter said, adding that the S status also gives refugees access to language courses.

The Russian invasion of Ukraine has increased fears across Europe, including in Switzerland, that nuclear reactors could be bombed, releasing radioactive substances that can cause thyroid cancer.

Defence Minister Viola Amherd told members of the parliament that iodine tablets, believed to protect the thyroid gland from radiation, were already distributed to everyone living within a 50-km radius around Swiss power plants.

For the others, it is up to the cantons to ensure that their entire population receives these tablets within 12 hours after a national order is given, she said.

Regarding the question from MPs about when this measure would be taken, Amherd said the timing would depend on the place of the accident and whether the wind would blow the radioactivity toward Switzerland.

In the event of an incident and heightened risk, the National Emergency Operations Centre would instruct the population accordingly.

If you have ever dreamed of having an authentic airplane seat in your house, then now is your chance to bid on one.

The national carrier is teaming up with an online auction house, Ricardo, to sell its Economy Class seats from the Boeing 777-300ER aircraft that have been eliminated after the airline installed the new Premium Economy Class cabins.

All the proceeds from the auction will be donated by SWISS to the Pigna Foundation, which “offers people with disabilities a place to live and work along with care and support that are tailored to their needs”, the airline said.

SWISS is auction off its Economy Class seats that are surplus to requirements. The auction proceeds will be donated to the Pigna Foundation, one of SWISS’s long-standing charity partners. More information: https://t.co/5CfYQIMDlt pic.twitter.com/l06WPoGLna

While overall the country will continue on the road to post-Covid recovery throughout 2022, its pace will be “somewhat slower” than expected.

SECO has revised its 2022 growth forecast to 2.8 percent, versus 3 percent predicted in December.

“The Swiss economy would thus continue its pandemic recovery for now with above-average GDP growth, but with less momentum than in the previous forecast”, SECO pointed out.

“This scenario is assuming no significant downturn among key trading partners and, in particular, no major energy and raw material shortages in Europe”.