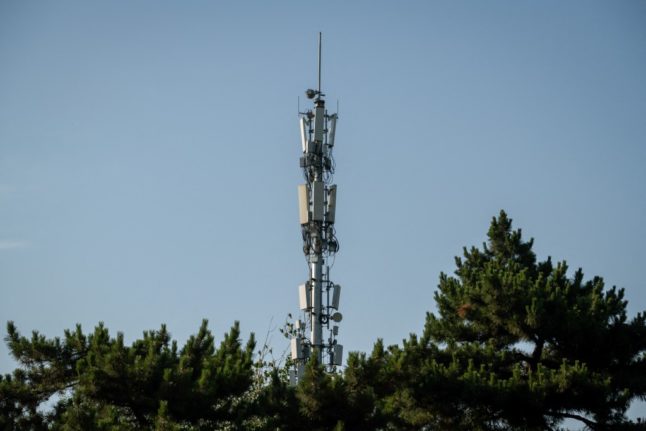 An increasing number of people in Switzerland are in favour of 5G technology. Photo by NICOLAS ASFOURI / AFP

Minsk is considered Russia’s accomplice to war in Ukraine, and the Federal Council has decided to tighten the sanctions against Belarus, following steps that the European Union had already taken earlier this month.

They mainly concern trade and financial sanctions and are very similar to the measures already imposed on Russia.

The measures that went into effect on Wednesday include export bans on dual-use (military and civilian) goods; import of the goods Switzerland typically buys from Belarus, such as wood and rubber products, iron, steel and concrete; and the end of public funding and financial assistance for commercial exchanges or investments.

Also, transactions with the Central Bank of Belarus are no longer permitted. The Federal Council has also published a list of banks excluded from the SWIFT international messaging system.

The heads of the Swiss Employers’ Union, the Swiss Trade Union, the Swiss Union of Arts and Crafts, and Travail.Suisse met with Justice Minister Karin Keller-Sutter to discuss ways of facilitating employment for the refugees while ensuring protection against abuse and wage undercutting.

For the Federal Council, access to employment will allow Ukrainian refugees to participate in social and economic life, and become financially independent during their stay in Switzerland.

However, the exercise of a gainful activity remains subject to cantonal authorisations, which must ensure that the conditions of remuneration and work comply with the usual practices of the place, profession and branch concerned.

Ukrainians are granted special S status, which allows them to work or study in Switzerland for up to a year.

Mortgage interest rates have risen to multi-year highs for many homeowners.

With the start of the Ukraine war, interest rates for fixed-rate mortgages initially fell significantly. However, they have been rising sharply for about a week, according to comparison service Moneyland.

“The war in Ukraine is fueling the already high inflation, which causes a tightening of monetary policy or interest rate hikes,” said Moneyland analyst Felix Oeschger

Switzerland was among the first countries to begin deploying 5G, but health fears over radiation from the antennas have sparked much opposition to the new technology.

In a Swiss survey conducted in 2020, the majority of respondents were against 5G network antennas in the vicinity of their homes.

However, a  similar study released this week by consumer site bonus.ch, shows that nearly half (49 percent) of those surveyed  support 5G technology, compared to only 35 percent in 2020. Only 27 have an unfavourable opinion, compared to 44 percent two years ago.

In the new survey, 55 percent cited technological advances as a reason for their  support of 5G networks, followed by those who see advantages of this technology — such as improved speed — and the reduction in energy consumption.

On the other hand, fears for the environment and for cybersecurity are gaining ground compared to 2020, according to the survey.