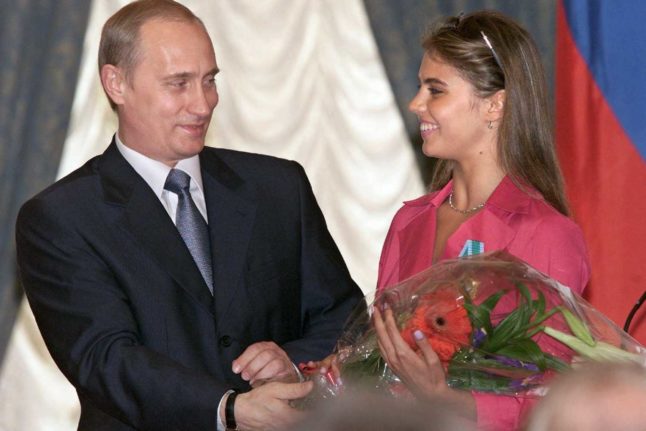 Under the title “Switzerland, why are you sheltering the helpers of the Putin regime?”, the petition calls for the immediate extradition of Kabaeva to Russia.

The petition compares Kabaeva and Putin to Nazi leader Adolf Hitler and his wife Eva Braun.

Where in the world is Alina Kabaeva?

The 38-year-old gymnast, who has been pictured with the 69-year-old Putin on several occasions, is rumoured to have given birth to four children with the Russian leader.

The first of which, a daughter, was born in the southern Swiss town of Lugano.

According to US news outlet Page Six and British newspaper The Times, Kabaeva lives in a heavily fortified chalet in the Ticino alps in the south of the country.

However, US officials said they believed Kabaeva lived “in a high-walled villa with a helipad” in Cologny, an upmarket suburb of Geneva, Swiss news media reports.

Swiss news outlet 20 Minutes said a statement from immigration authorities indicated Kabaeva did not have a residence permit to live in Switzerland.

In late April, Kabaeva appeared at a gymnastics event in Moscow, which was adorned with Russia’s ‘Z’ symbol which has become synonymous with the Ukraine invasion.

Who is Kabaeva and will she be kicked out?

Kabaeva won a gold medal at the 2008 olympics and is rumoured to be romantically linked with Putin since 2008 after an article in the “Moskovskij Korrespondent”, which was later shut down after publishing the report.

The online petition does not appear to have any legal influence over any migration or extradition decision made by Switzerland.

Whether the former gymnast can be extradited firstly depends on whether she actually lives in Switzerland, with national broadcaster RTS reporting on Monday that federal justice officials believe she is not currently in Switzerland.

“The FDJP has no indication of the presence of this person in Switzerland. The appropriate clarifications have been made.”

In practice, whether she will be deported is likely to depend in part on her citizenship status.

Some media outlets have reported that Kabaeva has Swiss citizenship. Switzerland reserves the right to exercise its own citizens but does not do so in practice.

Children born in Switzerland do not automatically receive Swiss citizenship, but can be deemed citizens if a parent has a Swiss passport.

The Swiss government is expecting 50,000 refugees to arrive fleeing the conflict, although some estimates suggest the real number is likely to be higher.

An estimated 3.5 million people have fled Ukraine in the month since the invasion, the majority of which are currently in neighbouring Poland.