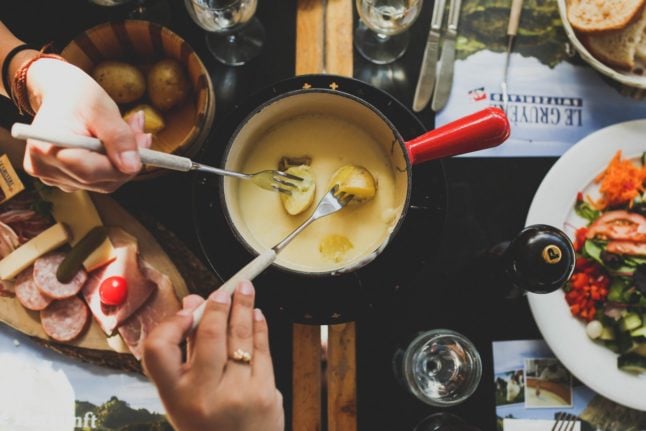 Along with raclette, fondue is Switzerland’s favourite cheese dish. Photo by angela pham on Unsplash

The summer timetable went into effect at Zurich Airport from March 27th, with the number of destinations served (191) now almost as large as before the pandemic.

The new routes include Bologna and Pisa in Italy, Nantes in France, Vilnius in Lithuania, Newquay in England, Ponta Delgada in Portugal, and Ajaccio in Corsica.

Also, from the end of April, there will be more flights to North America, especially to Chicago and New York, the airport announced.

A new survey from the Swiss Milk Producers Association shows that an average person in Switzerland consumers just over 23 kg of cheese a year.

Among the most popular Swiss cheese are — no surprise here —  fondues and raclettes, followed by Tête de Moine, Fribrourgeois Vacherin, as well as hard cheeses, such as Gruyère, Etivaz or Emmentaler.

While there has been an acute shortage of domestic butter in the country resulting in increase of import quotas, Swiss cheese is, fortunately, plentiful.

Despite the high cost of managing the health crisis, Basel-City had an impressive budget surplus of 215 million in 2021.

The canton came through the pandemic well thanks in large part to the crisis-resistant pharmaceutical industry, in particular giants Roche and Novartis.

“It makes sense to now give some of the surplus back to the population. The aim is tax relief for everyone”, said canton’s finance director Tanja Soland.

In doing so, the Basel government is also reacting to political pressure to lower taxes. Cantonal parliament will now decide on the amount of the tax package.

One of Switzerland’s largest insurance companies, Zurich, has removed the letter Z from its social media accounts because it is marked on Russian military vehicles that invaded Ukraine.

Zurich said it is removing the logo because the company does not want to be seen as siding with Russia in the conflict.

The letter is displayed prominently on banners at pro-Kremlin rallies.

“We are temporarily removing the letter ‘Z’ from social channels where it …could be misinterpreted,” as a sign of support, the company added.

If you have any questions about life in Switzerland, ideas for articles or news tips for The Local, please get in touch with us at [email protected]al.ch

Out of the 1,300 current job seekers in Zug, a relatively high proportion of around 300 people are foreign employees. This is due to the fact that an above-average number of international  companies — mostly in raw materials, chemical and financial services sectors — are based in the low-tax canton.

However, according to a report by public broadcaster SRF, finding a job is more difficult there because most foreigners in Zug are highly specialised in their fields and can’t easily switch from one industry to another.

The canton is now helping unemployed foreigners back into the job market — for instance, by setting up job fairs where job seekers meet recruiters and companies looking for personnel.

“Zug is a very attractive job market, and if we help the unemployed expats, many can gain a professional foothold here again”, according to Gianni Bomio, president of the canton’s Association for Labour Market Measures.

Postfinance,  a financial services unit of Swiss Post, is looking to hire software developers, but only those who  — according to an ad placed on the LinkedIn’s career platform  — “do not devote working hours to the fight for equality”.

Specifically, it seeks employees who want to work out “the difference between 0 and 1 and not between XX and XY” — the former referring to codes and the latter to male and female chromosomes.

While the advertisement was intended to be clever, “with this text, Postfinance is massively devaluing the fight for equality”, said Agota Lavoyer, an expert on sexualised violence.

In its defense, Postfinance responded that its ad was misunderstood.

“The message is that equality is firmly anchored in the culture at Postfinance and is so normal that employees do not have to spend any time on the job thinking about it”, said spokesperson Dörte Horn.

Now is a good time to sell your house

Property prices have skyrocketed in recent months, and a house today costs almost 30 percent more than a decade ago, according to real estate consultancy firm Iazi. And in certain high-demand areas like Zurich and the Lake Geneva region, prices are significantly higher.

Ruedi Tanner, president of the Swiss Chamber of Brokers (CSC) said owners who are selling their properties now “have clearly chosen a good time”.

The demand is such that “in many regions, there are hardly any more offers on the property market”, he added.

When the Italian-speaking canton published its annual statistics recently, many were astonished (and not in a good way) to discover that a small commune of  Riva San Vitale registered 791 crimes in 2021.

This means the crime rate has increased by 1313 percent compared to previous year. “When I read that, I was flabbergasted,” said Antonio Guidali, mayor of the 2,600-resident community.

It turns out, however, that there is no need to rush for bullet-proof vests; according to police reports, only two residents, who committed several hundred cases of insurance fraud, are to blame for the staggering crime rate.