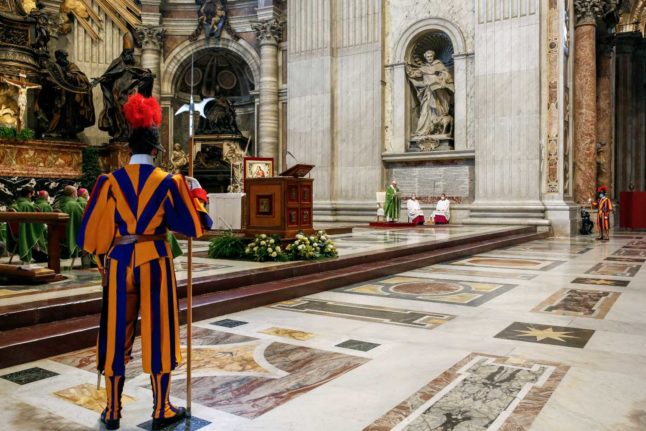 A Swiss guard at the Vatican in Rome. Photo: REMO CASILLI / POOL / AFP

“It is necessary to highlight the crimes of the past committed within the Roman Catholic Church. We must learn the lessons and do everything possible so that no injustice can happen again,” said Joseph Maria Bonnemain, bishop of Coire and head of the Swiss bishops’ conference.

“The leadership has a duty to learn from the past and to do everything possible to ensure that people are adequately protected in their dignity and sexual integrity,” he said in the speech posted online.

In order for the project to proceed, the Church intends to guarantee the project team “free access to files and archives.”

Their conclusions are expected in the autumn of 2023. The report will have to specify to what extent Catholic Church institutions have supported the research team in gathering information and gaining access to archives, records and witnesses.

The year-long project “lays the foundation for future research projects on the history of sexual violence committed in Switzerland by members of the Catholic clergy, Church employees and clerics since the mid-20th century,” according to the study’s objectives published online.

“The focus is on the structures that allowed the sexual abuse of minors and adults and that made it difficult for them to be altered and punished,” it said.

Public figures such as bishops, their auxiliaries and abbots as well as holders of ecclesiastical leadership posts will not be anonymised.

“The study… and its results should set the stage for a Roman Catholic Church free from fear,” said Joseph Maria Bonnemain.

“This presupposes that the Church becomes a learning organisation, ready to recognise its own mistakes and modify the existing structures that allowed or favoured crimes and their cover-up,” he said.