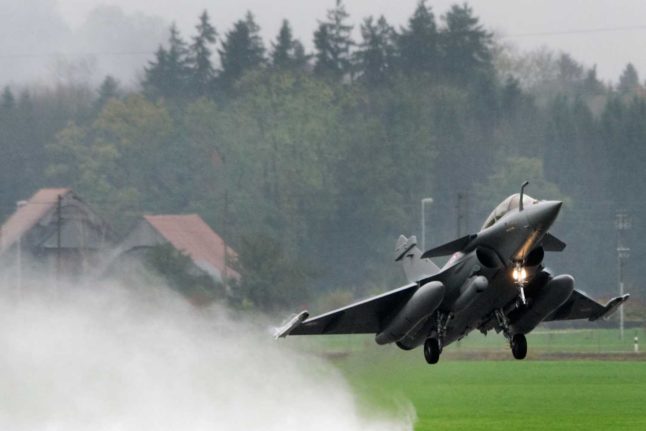 Would NATO help Switzerland if the latter was attacked? Photo: Fabrice COFFRINI / AFP

Switzerland’s neutrality prevented it from entering into military alliances such as the North Atlantic Treaty Organisation (NATO).

Switzerland does however work with NATO in relation to a number of matters, with that collaboration increasing in recent years.

This level of cooperation is not unusual and not necessarily a product of Russia’s Ukraine invasion, with several non-NATO nations like Finland and Sweden taking part in NATO activities on a regular basis.

Some Swiss politicians are pushing for a greater degree of NATO integration, although few have actually called for neutral Switzerland to join the bloc.

This move towards greater cooperation has also won public support, with 56 percent of the Swiss public supporting a closer relationship to NATO.

How does Switzerland work with NATO?

In 1997, Switzerland joined the Partnership for Peace Program, an agreement which allows for collaboration between NATO and non-NATO members.

This agreement is renegotiated every two years and is up for review at the end of 2022, upon which Switzerland could elect to intensify cooperation with the bloc.

Under the current arrangement, Switzerland has pledged to increase its inter-operability, in particular with regard to the Swiss peacekeeping force in Kosovo.

In 2004, the Swiss army also adopted a range of NATO standards, including with regard to staff structure and military signatures.

The Swiss army participates in military exercises with NATO related to cyber attacks, for instance as a part of the Cooperative Cyber ​​Defense Center of Excellence in Tallin, Estonia, one of Russia’s closest neighbours.

A commander in the exercises said it has improved Switzerland’s capacity to handle cyber attacks.

Switzerland also participates in intelligence exchanges with NATO with a focus on stopping terrorism.

What would happen if Switzerland were attacked?

The centrepiece of Switzerland’s refusal to join NATO is the country’s age-old commitment to neutrality.

While this is a cornerstone of Swiss foreign policy during peacetime, if Switzerland were attacked, the commitment to neutrality would lapse.

This could mean that Switzerland would be free to join NATO immediately in the event of an attack, or to make some other form of partnership arrangement which could allow Switzerland to defend itself.

Although Article 5 of the NATO charter would not directly apply to Switzerland as a non-NATO member, Switzerland’s partnership arrangements with the bloc along with its strong alliances with several NATO countries would likely result in intervention.

Swiss politician and president of the FDP Thierry Burkart said that NATO would be likely to support Switzerland if it were attacked, whether that be on a direct or indirect basis.

All of Switzerland’s large neighbours are NATO members, other than Austria, and would be expected to intervene should Switzerland be attacked.

Burkart however warned that these alliances would also likely require Switzerland’s intervention should a neighbour be attacked.