Just imagine: he can be all yours. Photo: Pixabay

More racial discrimination cases recorded in Switzerland — but what does this mean?

Last year, 630 cases of discrimination were reported in Switzerland — 58 more than in 2020, according to the Federal Commission Against Racism (CFR).

Most of them occurred in the workplace and in schools, and were directed at black people and Muslims, CFR reported.

However, this number is not an accurate reflection of xenophobia in Switzerland; it just shows that more cases are being reported, according to CFR’s Giulia Reimann, who added that the official figure is just “the tip of the iceberg: we do not know how many cases are not signalled”.

READ MORE: Can an employer in Switzerland ask about an employee’s ethnic background?

As odd as this may sound, 58 percent of Switzerland’s population are opposed to the country’s largest supermarket chain, Migros, selling alcoholic beverages, a new survey of 9,673 people reveals.

The elderly are particularly against this idea. Among those over 65, 67 percent of participants oppose the proposed measure. In the age group of 50 to 64 years, 61 percent are against it.

This being Switzerland, the contentious issue of booze or no booze will be decided by the voters: about 2.3 million members of 10 regional Migros cooperatives can weigh in on this measure from May 16th to June 4th.

Each regional cooperative must decide individually, by a two-thirds majority, whether the stores it governs will sell alcohol.

This may lead to an outcome where one Migros will sell alcohol but another store in a neighbouring cooperative, will not.

Migros has said only the right to sell alcohol is up for debate, with cigarettes permanently off the table.

In fact, while it may seem like a seismic shift, the company has been selling alcohol through a variety of loopholes for decades.

Laboratory rats are being put up for adoption

Looking for a new pet with an impeccable pedigree and background in science? Then the Federal Polytechnic Institute of Lausanne (EPFL) has just what you need.

The laboratory rats that the EPFL no longer uses for research purposes are donated to the Swiss Animal Protection (PSA) organisation, which is charged with finding them good adoptive (human) families.

EPFL reports that its rats, which are mainly used in behavioural experiments, are “very good at learning new tasks.”

It does not specify what exactly these tasks are, however.

The 100-metre-high building, which is currently under construction in Winterthur, canton Zurich, is expected to be completed by 2026. 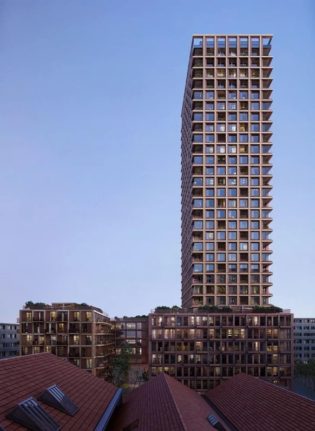 The project, called Rocket & Tigerli, will also include three other buildings, in addition to the world’s highest tower.

According to Implenia, the company responsible for the project, the tower, named Rocket, will offer modern, high-quality apartments and, due to its height,  “a unique view”