Frontex: How Switzerland’s 'border vote' on May 15th could impact travel

On May 15th, voters will decide on three issues. Rejection of one of them, the so-called Frontex, could have consequences on travel to and from Switzerland. This is how.

Since 2011, Switzerland has participated in the European Border and Coast Guard Agency (Frontex), which monitors the external borders of the Schengen area.

The European Union has decided to strengthen this agency by giving it more financial resources and staff. As a member of the Schengen area, Switzerland is called upon to increase its annual contribution beyond what the country has provided so far — 24 million francs donated in 2021, along with six members of staff.

The EU wants Switzerland to raise its contribution to 61 million francs per year and 40 employees by 2027.

The Federal Council and parliament have agreed to participate in the expansion of Frontex, arguing that ending this cooperation would have significant repercussions on security, asylum, cross-border traffic, tourism and the economy in general.

However, opponents of the law, including mostly left-leaning groups, are arguing that “Frontex is responsible for the violent policy carried out against migrants at the external borders of the EU” and is complicit “in human rights violations and unlawful deportations”.

What would happen if the proposal is rejected at the polls?

One of the consequences of the refusal would be that international travel could become more difficult not only for Swiss citizens, but also for people coming into Switzerland.

The reason can be summed up in one word: Schengen.

Right now Switzerland, though not part of the European Union, is a member of the passport-free zone of 26 countries, which abolished internal borders, allowing unrestricted movement of people within the zone.

Swiss travellers take for granted the ease and convenience of travelling from one Schengen country to another without systematic customs checks, as is the case with those arriving from outside the EU.

However, if Frontex is turned down on May 15th, “Switzerland could be excluded from Schengen, so the freedom of movement would be limited”, the Federal Council and the parliament argue in the referendum materials distributed to all voters’ households.

“This would harm the tourism industry and would have repercussions on our economy and relations with the EU”. 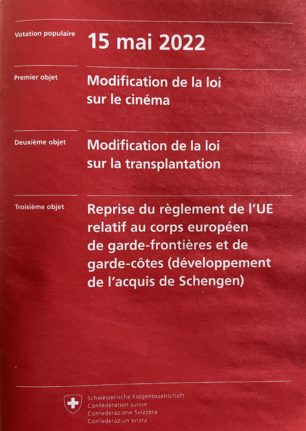 The reason is “because financial participation in the development of the European Border Protection Agency is considered to be an integral part of the Schengen Treaty”, according to a report in Tribune de Genève (TDG).

The article pointed out that “in every airport in Europe, passengers are classified into two strict categories, ‘Schengens’ and ‘non-Schengens’. The former can go straight to the boarding gate after the security check. And the others have to stand in a queue for passport control. Same on arrival”.

If the proposal is tuned down, the EU member states will have to decide whether Switzerland can remain in the Schengen zone. “If it is not an unanimous 'yes', then the agreement falls automatically, causing complications for trips abroad”.

It would also discourage visitors from third nations from including Switzerland on their tour of Europe. Depending on their nationality, they would have to apply not only for a Schengen visa, but also for an additional one allowing them to enter Switzerland.

Frontex opponents, however, downplay its importance, claiming that issues other than convenient travel are more pressing.

“The partitioning of Europe – in which Frontex plays a central role – is not a solution, but a racist and imperial response”, according to Livia Tepper, spokesperson for the anti-Frontex committee.

The committee’s main focus is not the ease of crossing borders but deportation of illegal migrants  and asylum seekers from Europe —a claim that the government denies, arguing that “Switzerland is actively engaged in the protection of human rights”.

What else is at stake on May 15th?

Sunday, May 15th, sees the latest round of Swiss referenda.

READ MORE: EXPLAINED: What’s at stake in Switzerland’s May referendums?

On a federal level, three questions are up for consideration: Netflix and streaming, organ donation rules and Frontex. More information on these votes are available at the following links.

READ MORE: What is the ‘Netflix vote’ and how could it change TV in Switzerland?

EXPLAINED: What Switzerland’s ‘organ donation’ vote means for you

Frontex: How Switzerland’s ‘border vote’ on May 15th could impact travel

There are also dozens of referendum questions being asked at a cantonal level all across the country.

In Zurich, voters will go to the polls to decide on several questions.

Perhaps the most relevant for Local readers is the referendum on improving the naturalisation process, including making the system uniform across each of the canton’s 162 municipalities.

Detailed information is available at the following link.