From better Covid situation to controversy over a 'bunker' house, this is what's happening in Switzerland right now.

As weekly figures released on Tuesday by the Federal Office of Public Health (FOPH) indicate, the downward trend is still continuing: 16, 606 new infections have been recorded in Switzerland since April 26th.

By comparison, 22,730 cases had been registered in Switzerland in a span of seven days in the preceding reporting period, between April 19th and 26th.

Since the beginning of April, when the remaining coronavirus restrictions had been lifted, FOPH no longer reports daily figures, resorting instead to situation reports issued once a week on Tuesdays.

And speaking of Covid… more medical employees are being trained

The pandemic had brought to the forefront the shortage of qualified health care workers in Switzerland. But the situation in patient care is better now: 10,434 people chose a career in nursing in 2021 — five percent more than the previous year.

This is the finding of a new study by OdASanté, an umbrella group for Switzerland’s health workers.

The organisation also said that besides greater number of nurses, more other health workers are also being trained, including medical device technologists, as well as professionals in surgical techniques and biomedical analysis, among other specialties.

The shortage of nurses was the focus of the referendum held on November 28th, 2021. The initiative, which was approved by the voters, called mainly for sufficient nursing staff to ensure the quality of patient care, as well as training of more caregivers to relieve the pressure on the health personnel and avoid burnouts and dropouts in the profession.

An initiative to ban fireworks is launched

On Tuesday the collection of signatures began for the popular initiative seeking to limit the use of fireworks. The committee behind this proposal includes organisations such the Swiss League Against Noise, the Swiss Cynological Society (“Swiss Dog”), Pro Natura, and others.

The group argues that firecrackers scare small children as well as domestic and farm animals. They also cause environmental and health concerns: each year, 300 tonnes of fine particles are released into the air, causing respiratory problems and fire hazards.

But rather than outlaw fireworks completely, the committee said they should be limited only to certain events — such as New Year’s Eve and August 1st — but not allowed for birthdays and other private occasions.

In order to bring this issue to the ballot box, the committee must collect 100,000 valid signatures in 18 months.

The historic centre of Naters , in canton Valais, is lined with rustic chalets and other traditional housing— except for one structure: a modernistic home built from stark concrete.

The structure is at odds with the other houses, inciting criticism from many of the commune’s 10,000 or so residents.

What is even more incomprehensible to the locals is that this private house is now set to win a prestigious architecture prize — the most important award of this kind in the German-speaking region.

Some in Naters say they are appalled because the concrete block— referred to by the townsfolk as a ‘bunker’ or ‘parking garage’— doesn’t seem to meet the regulations set for new constructions in the village, including materials, facade and colour. 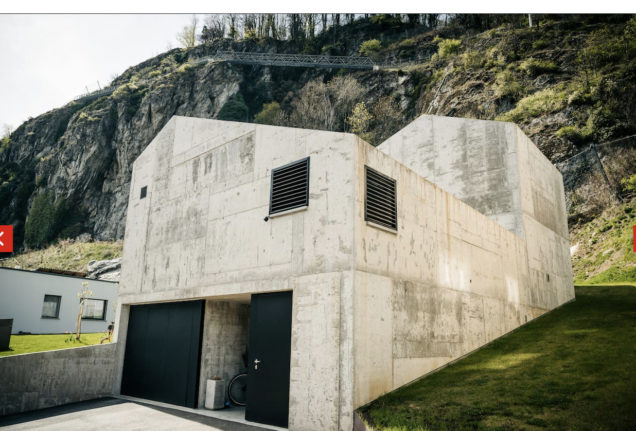 Naters residents are not loving this house. Photo: Twitter Blick

For this reason many people have said they don’t understand how the council allowed such a structure to be erected in the first place, especially as other attempts at modernity had been rejected.

"Once we wanted to replace our roof with corrugated iron, but objections were raised and we weren't allowed to do it. And now this,” said one resident, Chrigel Blumenthal.

Rumour has it that the owner of the concrete house is related to one of the local councillors, but the town denied that the kinship had any influence on the decision: “Anyone could have built this house here”, authorities said.