Social aid to non-Europeans and popularity of working from home: this and other news in The Local's latest roundup.

However, most of the participants in the consultation process, which ended on Tuesday, are against this measure, because it would impact families with children. According to Social Democrats and the Greens, the planned new regulation also violates the ban on discrimination.

Only the Swiss People’s Party (SVP) and the Centre support the Federal Council's plan.

Federal government figures indicate that cantons and communes spend about 2.8 billion francs on social aid — up from 900 million in 2010.

New data: Most of Switzerland’s cross-border workers come from France

While this is not exactly breaking news, a new study of the first quarter of 2022 by the Federal Statistical Office (FSO) has reconfirmed that the vast majority (over 203,689) of cross-border employees come from France.

As can be seen in the following chart, the number of French cross-border workers in Switzerland has increased over time.

There have also been slight increases in the number if Italian and German cross-border workers, while Austria's figures have remained steady. 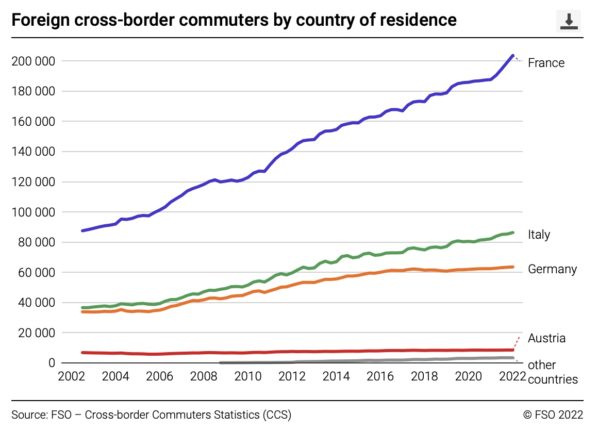 Working from home has become widespread during the pandemic.

But even now that life is mostly back to normal, many people in Switzerland continue to work from home, with this trend becoming more and more prevalent.

According to a new survey by Marketagent.com Schweiz AG, 75 percent of those whose job allows them to work from home would like to continue doing so, at least part time.

"The challenge for companies is no longer to make [this option] possible, but to define the home office workload in such a way that employees are satisfied and the quality of work increases," said study leader Jaqueline Rütter.

Why giving Ukrainian refugees cheap (or free) housing could backfire

Letting refugees stay temporarily in vacant apartments may seem like a decent thing to do, but this move could cause problems for the landlords.

That’s because Swiss tenancy law is “very, very formalistic. If the landlord makes a small mistake, it can have serious consequences”, Monika Sommer, deputy director of the homeowners' association told SRF public broadcaster.

For instance, if an accommodation is rented to refugees for only nominal costs, subsequent tenants can demand the same rental conditions and the landlords would have to comply.

One option to bypass this potential hurdle is to offer, in the rental agreement, exceptional "Ukraine discounts" applying only to certain people and situations, according to the Federal Office for Housing, which is pointing out this discount option in tenancy law.

READ MORE: How Switzerland is supporting refugees from Ukraine