EXPLAINED: When should you greet a Swiss person?

The Swiss have very specific etiquette rules and are sticklers for complying with each one, including when and how to greet friends and strangers. Here's how you can navigate this sometimes complicated web.

You are probably already accustomed to routinely greeting your friends, acquaintances, boss, co-workers, and hopefully neighbours too.

You might even be aware that saying hello (in whichever of the three national languages you speak) to your doctor, dentist, or staff in various administrative or business offices is also de rigueur.

But what about strangers — should you greet them as well?

If you think saying grüezi, bonjour, or buongiorno to people who randomly cross your life’s path is redundant, think again.

Not doing so could be taken as lack of integration — probably the worst mistake a foreigner in Switzerland could make, aside from breaking the law, asking for social assistance, or claiming Belgian chocolate is tastier than Swiss.

In fact, in some places not saying ‘hello’ could deprive you of Swiss citizenship.

There is an actual case of this happening: in 2016, a family from Kosovo was denied their request for naturalisation in Bubendorf, Basel-Country, because they did not greet people they passed in the street (as well as wearing sweatpants).

While this is probably an extreme example, the fact remains that greeting people, especially those in your village, is a must (whether or not you are in a habit of wearing your jogging bottoms).

It is all the more important in smaller communities where you are likely to meet the same  people over and over again, and your faux-pas are more likely to be noticed, remembered, and held against you for all eternity.

It is not an impossible scenario in a small community that a person you snub on the street just happens to sit on your local naturalisation committee.

READ MORE: 16 ways to make your life in Switzerland easier without really trying

But this also holds true in general, even in situations where you won’t see the same person / people ever again. For instance: 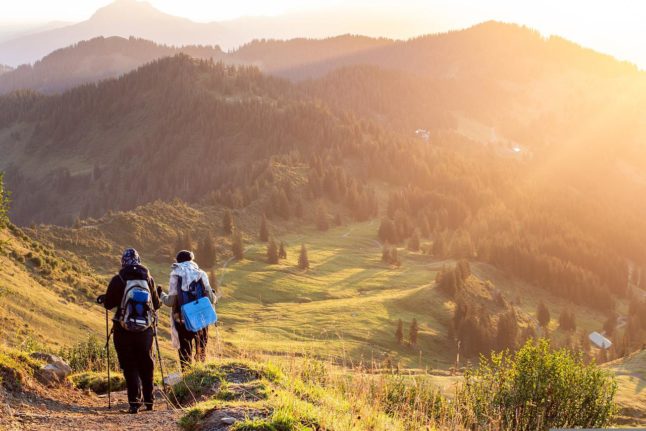 Greeting people on hiking trails in a must. Photo: Pixabay

How do you greet people?

For eons and up until March 2020, the Swiss just loved to say ‘hi’ and ‘bye ‘with a three-cheek kiss.

It didn’t matter whether they knew someone for a long time or for five minutes —the right cheek-left cheek-right cheek ritual was practiced with everyone they met.

Thankfully, this custom has fallen victim to the pandemic and nobody can predict whether it will fully ever re-emerge but, at least for the time being, there is a reprieve from this virus-friendly way of interacting.

Instead the ‘elbow touch’ became the new ‘normal’ way of greeting people.

However, neither the three-cheek-peck nor the elbow bump are considered as signs of successful integration.

As far as we know, practicing either or both will not help anyone obtain Swiss citizenship, though the rules may change.