From spreading monkeypox to polluted soil: find out what's going on today in Switzerland with The Local's short roundup of the news.

Another monkeypox case detected in Switzerland

A Zurich resident is the third person to test positive to the virus within a span of one week, following two other infected people, in Bern and Geneva. All three tested positive after a trip abroad.

Worldwide, monkeypox cases are spreading quickly, with more than 330 reported as at Friday, significantly up from 90 confirmed the previous week.

For the time being, Swiss officials are doing nothing more than monitor the evolution of the virus in cooperation with international health authorities and experts, according to Linda Nartey, vice-president of the Federal Office of Public Health.

She added that this virus is believed to be less transmissible than Covid, and at the moment there is no indication of another pandemic emerging in Switzerland, or elsewhere.

However, "we have to watch the outbreaks and in each case carry out contact tracing immediately to quickly interrupt any transmission chains”, Nartey said.

READ MORE: EXPLAINED: What is monkeypox and what is Switzerland doing about it?

May temperatures were record-high

With May almost over, a look back confirms that temperatures during the month were around 2.5 degrees above the average; in western Switzerland and Ticino, they were as much as 4 degrees higher than “normal” for the season.

After a cooling the past few days, meteorologists are forecasting that temperatures will again reach 30 degrees in parts of Switzerland.

Hotter weather and not enough rainfall are sparking concerns about the possibility of drought in some parts of the country.

Switzerland is not as clean as you may think

Despite its reputation for cleanliness, 38,000 sites across the country have been found to have a high concentration of pollutants in the soil, according to the Federal Office for the Environment (FOE).

This figure represents an area of 220 square kilometres, where ground is  polluted to different degrees and for different reasons.

About 80 percent of these locations can’t be cleaned up at  all, authorities say. For the remaining 20 percent — about 7,500 sites  — investigations must be undertaken to find out what can be done to improve the situation.

The map below shows whether you live in one of the areas with polluted soil. All the sites marked by coloured circles indicate locations where varying degrees of pollution have been detected. 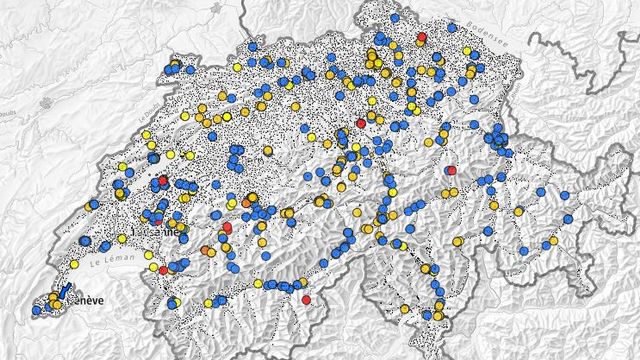 The idea of shortening the work week has been discussed in Switzerland for a while, and though some groups are pushing for it, it is nowhere near being implemented on a large scale.

Now, however, a company based in canton of Lucerne is taking first steps in this direction.

For the more than 500 employees of Remimag, which operates in the gastronomy sector,  the work week will now be four days long, though the workers will have to put in the same number of hours as previously.

This pioneering step happened for a good reason.

“We had difficulty recruiting staff, same as the entire gastronomy sector. The four-day week makes us more attractive to the younger generation”, said Bastian Eltschinger, the company's co-diector.