From scorching weather to defining neutrality: find out what's going on in Switzerland on Friday with The Local's short roundup of the news.

If you think the last few days have been extremely hot, the worst (or the best, depending on your preferences) is yet to come.

Starting today, a “heat peak” will hit Switzerland, with temperatures reaching 37 degrees in some regions.

The official meteorological service MeteoSwiss defines a heat wave as an average daily temperature of 25 degrees or more for at least three days in a row, which is classified as “Alert Level 3”.

This is expected to happen in Switzerland from Saturday noon to Monday evening. 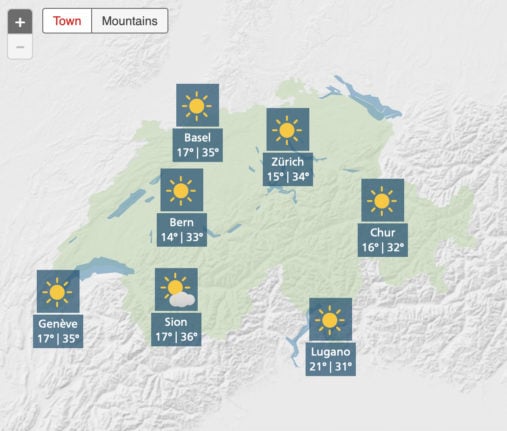 READ MORE : How this week’s heatwave will hit Switzerland and how to stay cool

The Council of States has adopted a motion requesting an official clarification of the legal limits of Swiss neutrality.

The report should cover particularly the limits of neutrality law as related to arms deliveries, NATO membership and cooperation with this organisation, as well as sanctions against other nations.

“Our neutrality is not a fixed construction. We must constantly adapt it to reality”, he added.

Switzerland second in the world in terms of competitiveness

The new World Competitiveness Ranking has placed Switzerland in the second place, just behind Denmark, for its competitiveness.

The International Institute for Management Development (IMD) in Lausanne based its assessment on 333 criteria, such as economic performance, business efficiency, public finance, tax policy, and others.

While Switzerland slipped in ranking this year (it held the top position in 2021), the country is ranked number 1 in government efficiency and  overall infrastructure, including health and environment, as well as education.

On Thursday the European Commission has updated the list of air carriers which are subject to an operating ban or restrictions in the European Union, including in Switzerland.

Most of them are from Africa, Asia and South America, with several Russian airlines also included on the list.

The Swiss Travel Federation (FSV) said that if an agency books a flight with one of the airlines appearing on list at the request of the customer, the client must complete and sign the liability exemption form.