Property, traffic and jobs: What a doubling of cross-border workers means for Switzerland

Over the next decade, the number of employees from France who commute to their jobs in Switzerland is predicted to increase two-fold.

Currently, about 190,000 French citizens —aptly called ‘frontaliers’, which in French means ‘border people’ — commute to their jobs in Switzerland.

Data from the Federal Statistical Office (OFS) shows that the highest number — 90,000 people — are employed in Geneva. The rest work in other cantons that share a border with France: Vaud, Jura, and Neuchâtel.

However, according to the European Cross-Border Grouping (GTE) and Crédit Agricole de Savoie bank, the number of these workers “will double within ten years”, said Olivier Balima, the bank’s deputy general manager. This projection is based on demographic and economic studies, he added.

This means that by the year 2032, nearly 400,000 people from the neighbouring regions of France will be employed in Switzerland.

The reason for the increase, the two groups say, is Switzerland’s aging population, as well as continuing shortage of skilled labour in some sectors; both factors “could increase the need to call on staff from the other side of the border"

In the healthcare sector alone, an estimated at 70,000 workers will likely be needed, according to  Gabriella Taricone, head of the GTE's employment service. In fact, at Geneva’s university hospital (HUG), 3,200 caregivers out of around 5,200 in total — 60 percent — come from France.

Many are also employed in the service industry, retail, and hotel and restaurant sector.

The forecast for the increase in frontaliers in next decade is not in itself a new phenomenon.

Numbers have been rising since the beginning of the 2000s, when the Free Movement of Persons Agreement signed between Switzerland and the European Union went into effect.

The treaty lifted restrictions on EU / EFTA citizens wishing to live or work in Switzerland — either permanently (permit B or C) or as cross-border commuters (permit G).

As this OFS chart shows, the number of frontaliers has risen dramatically in the past 20 years. 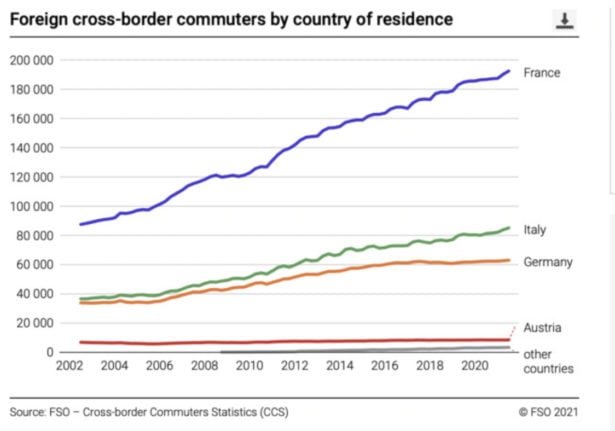 What impact will the increase in cross-border workers have?

Based on what we know now, the effect will likely have a three-fold effect.

As The Local reported on June 3rd, the Léman Express, a train linking the Geneva region with neighbouring French towns to provide a quicker commute for cross-border workers, has caused property  and rents on both sides of the border to rise sharply.

In the vicinity of the train’s 45 stations, real estate prices soared by 8 to 9 percent on average — a sharper increase than elsewhere in the region.

Prices went up in the French departments of Haute-Savoie and Ain, as well as in Swiss cantons of Geneva and Vaud, all of which lie along Léman Express’ 230-km track.

READ MORE : How a cross-border train has pushed house prices up in Switzerland and France

Based on these facts, it is within a realm of possibility (and even probability) that the same trend will continue as more workers from France become employed in Switzerland.

Frontaliers already create bottlenecks at and near border crossings during peak times, and the situation will likely worsen with even more people coming and going to and from France.

While in terms of traffic Geneva is by far the worst in Switzerland, other border areas are impacted as well.

For instance, in canton Jura, which lies on the Swiss side of Doubs department in the Bourgogne-Franche-Comté region in eastern France, cross-border commuters are creating congestion at several border crossings.

This expression means the departure of trained or qualified people from a particular country — in this case, France.

While Switzerland benefits economically from the presence of cross-border workers, France — not so much.

This poses a problem for French companies located near the border, as they can’t find any personnel.

There have been many instances of French officials and employers complaining about their local workforce leaving in droves to work for a higher pay across the border.

One example is officials in the Haute-Savoie accusing private Swiss health clinics of ‘poaching’ essential healthcare workers during the Covid pandemic.

In another case, Jean Benoît-Guyot, who runs a plumbing business in the French commune of Saint-Julien-en-Genevois, which is located right on the border with the canton of Geneva, can’t find any employees to hire as “everyone wants to work in Switzerland”.

This disparity in Swiss and French wages was also made clear by another French citizen, Kévin Lecoq, who makes a daily cross-border trek to the Swiss canton of Jura..

“If we add up everything that has to be paid in taxes, we still have one and a half times the French salary”, he told The Local.

This article explains how this “exodus” affects French regions, and is likely continue to have a negative impact as numbers of cross-border workers continue to grow.