How different is raising kids in Switzerland compared to the United States?

What can families anticipate with regard to raising children in Switzerland and in which ways does it differ from the United States? Here is a look at some of the main differences.

Moving to a new country can come with a pretty big learning curve - especially if you're moving with family.

Switzerland offers the choice between public, private, international, and boarding schools. Public schools are however the norm for the vast majority of kids - of about 5,000 schools in Switzerland, only about 300 are private.

Some of the top boarding schools can be found in Switzerland, with families from all over the world sending their kids to them. Wait lists can be long, but this sleep-away option is available for kids ages 3-18.

Approximately 95 percent of Swiss parents send their children to public schools because they are free and because the educational system is such high quality.

Many international parents opt for public schools so their kids can pick up the local language and make local friends. Public schools in Switzerland are fantastic and your child will have access to a solid education complete with activities and outings.

There are physical education activities in addition to recess and bi-monthly trips for swimming lessons, and often ice skating in the winter.

Parents and students alike will almost immediately notice a difference in the amount of homework that comes home.

Heather Wittkopp has two sons that go to a private school in the German-speaking region, near Zug. She recalls the struggles back in Pennsylvania.

“It was very stressful and we would constantly be studying. We fought about it. It was hours of homework. It was not a good situation.”

When asked if things have gotten better since their move to Switzerland about two-and-a-half years ago, her tone completely changes.

“Coming here to the international school was just eye opening. It’s amazing what they learn here, but it’s also that the pressure isn’t there. In the US you’re constantly memorising for tests. And here, it’s more like they’re teaching for the real world-- like how to think outside the box.

While the US has a heavy drive-to-school and drop-off culture, parents in Switzerland are actively encouraged not to use cars to bring kids to class. Most kids walk, though it's common to see children on bicycles or scooters heading to school.

There are high levels of social trust in Switzerland which means children, most as young as four and five years old, start learning to walk to and from school alone.

Not only is this practice of raising independent children a family affair, the whole community is supportive and aware of it. There are crossing guards at all major streets who help students as they go to classes and as they go home for lunch or after school.

When asked about her thoughts on the level of social trust and the independence culture, working mom, Lara Junod says, “It’s pretty amazing that in this day and age, you know, in 2022 with the world that we’re in, that this can still exist. It shows that people do look out in your community.”

Originally from New York, Lara has lived with her husband and six-year-old daughter in French-speaking Lausanne for the past three years. “They teach them here to be quite independent, quite young.” 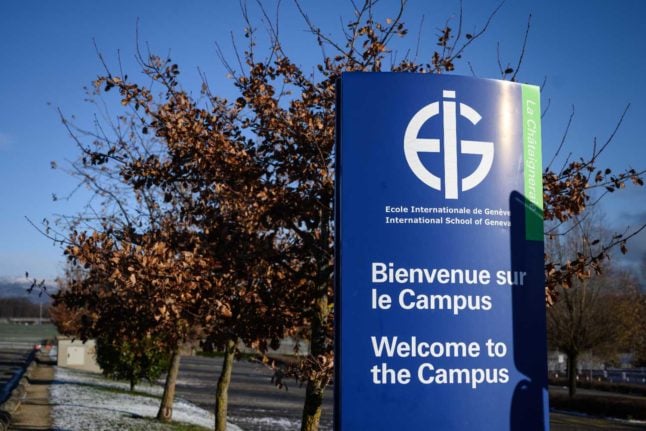 A two-hour lunch break is scheduled into the day, allowing for students to head home and have lunch with their families. If the parents work, however, there are after-school programs for which children can be signed up.

These programs provide lunch and care for the two hour break and primary school children will return to school for the rest of the school day before coming back to the after-school care program.

In the evening when the program shuts down, children are either picked up or will walk back home on their own.

Each canton offers weekly sports activities for children in kindergarten and primary school during the school year. The cost for the weekly activity is minimal and offers children something to do after school, gives them an opportunity to make new friends, and learn new athletic skills.

An example of some of these would be some of the traditional sports played in the US, but also fencing, sailing, American football, dance, and yoga, among others.

What about babies and younger kids who aren’t old enough to start kindergarten? There is a mixture of for-profit and not-for-profit childcare throughout the country.

Some daycare centres offer full immersion in the local language while others offer bilingual care (the local language and English). In public, not-for-profit daycare, parents can still expect a child-focused curriculum that supports young children’s development and growth.

EXPLAINED: What are the rules for homeschooling children in Switzerland?

It’s imperative to note that the cost for daycare in Switzerland is very high, costing around 2,500 Francs per month, per child, although some subsidies are available depending on the overall household income.

Due to this and in conjunction with traditional values, many children will stay home with a parent until they are of kindergarten age.

There are, however, play groups which allow for parents with babies and younger children to network and for both child and parent to socialise. Play groups can be for a couple hours at a time and are offered through churches and community centres several times per week.

While things at home will probably carry on much as they would in the United States, there are some nuances to living in Switzerland.

For example, there are dedicated quiet hours to which everyone adheres.

Additionally, there is a quiet hour from noon until 1P.M., so people can have a relaxed lunch and potentially quiet time for a lie down.

Finally, Sunday, in its entirety, is a quiet day.