France, Italy or Switzerland - which country is Mont Blanc in?

Towering majestically in the Alps, the mountain of Mont Blanc is naturally completely indifferent to political disputes over borders - but that doesn't stop the three countries arguing over it.

At least 30 million years old, it's fair to say that Mont Blanc definitely predates the existence of France, Italy and Switzerland, which means that as those countries were being created and drawn onto maps, they had to decide who got Europe's highest mountain.

Asking which country Mont Blanc is in is a more complicated question than you might think.

In total around 75 hectares of land is disputed territory.

Before that, France was arguing with the independent Duchy of Savoy, within which the mountain stood. Eventually Savoy ceased to be an independent state and its territories have been subsumed into the French départements of Savoie and Haute-Savoie, the Italian regions of Aosta and Piedmont and the Swiss canton of Geneva.

But it's not just borders that move, the mountain also shifts a bit and in fact the climate crisis is accelerating that process as the Mont Blanc glacier melts, along with surrounding snowfalls, leading to changes is the shape of the mountain range.

The dispute largely involves slightly different looking maps in the different countries though, and it seems unlikely that either side is about to go to war.

Famously-neutral Switzerland is also unlikely to launch a war over this issue, but it is in dispute with Italy over the location of a nearby mountain lodge, which has recently shifted position due to melting snows and glaciers.

While this might sound like something that is only of interest to cartographers, the ski industry is a lucrative one to all three countries, and the mountain lodge dispute has been the subject of diplomatic discussion since 2018. 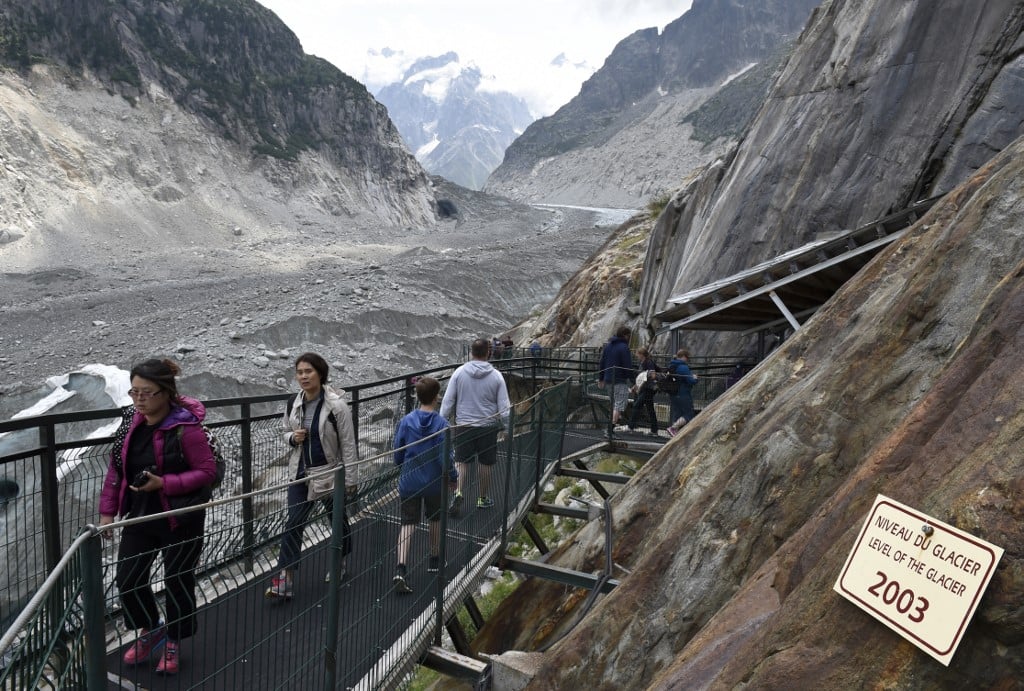 Signs at the Mont Blanc glacier show visitors how it is receding year by year. Photo by PHILIPPE DESMAZES / AFP

Increasing changes to the entire mountain range due to rising temperatures mean that these disputes are likely to become more common in the future.

For the moment, however, the dispute remains largely good-humoured - as seen in this Twitter exchange between the French and Swiss embassies during the Euros football tournament.