Switzerland may be the land of pharmaceutical companies, but it is facing a shortage of drugs, with some hospitals preparing to make key medicines themselves, Swiss media reported on Sunday.

The number of unavailable drugs has doubled in five years, according to Swiss newspaper NZZ am Sonntag.

Pharmaceutical companies report up to 200 cases of supply problems every year, which includes 77 medicines that the World Health Organisation or the Swiss government classify as essential.

If you were to add up all of the missing doses, pack sizes and dosage forms, then the number of unavailable products would increase to 613, the paper said.

The drug shortage is affecting specialist addiction centres, in particular: for example, Antabus, a key drug treatment for chronic alcoholism, is no longer available in Switzerland.

Mepha is the only company in Switzerland which makes Antabus, even though the patent for the active ingredient expired many years ago, and it's rationing supplies.

The company said the drug would not be available until November at the earliest because of quality concerns during production, according to the NZZ.

"The situation with the supply of medicines has been continuously deteriorating since the start of June," said Enea Martinelli, chief pharmacist at the FMI hospital group in Bern. 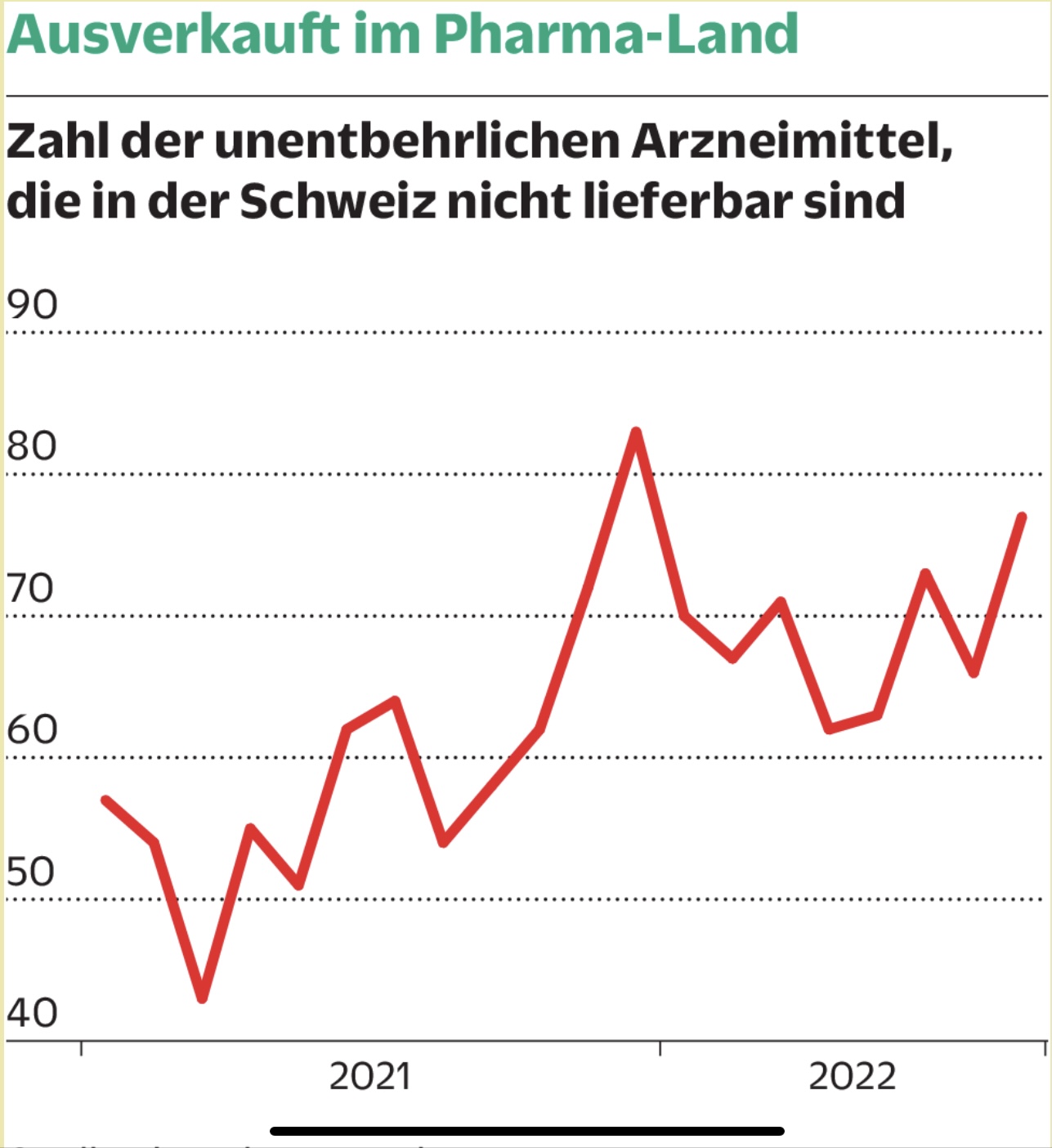 This chart from the NZZ (based on data from drugshortage.ch) shows the number of essential drugs that are not available in Switzerland.

Delivery problems aren't the only issue here, either: drugs are also 'disappearing'. Seven drugs have gone off market in the last four months.

These are usually older drugs; they might be proven but it's no longer profitable for companies to make them as the price is often only slightly higher than the cost of production, Martinelli explained.

To keep a drug on the market, there are many additional costs, including storage, sales and marketing and the destruction of expired packaging, Mepha spokesman Christoph Herzog told the NZZ.

Three modified-release opioid products are approved in Switzerland – and they're all made by Mundipharma – and none of them have been available for months.

The company has blamed this on "persistent production problems", according to the paper.

Products for children, such as cold medicines and cough syrups with Ibuprofen, have also been hit hard.

The Bern-based Insel hospital group has had to buy stocks from abroad and, like the Aarau cantonal hospital, is considering the complicated step of making products in house if the problem continues long term.

A group of experts – including representatives from the government, cantons, the pharma industry and hospital specialists – has recently started work on a plan to secure drug supply in Switzerland.

It will draw up proposals by the end of the year. Suggestions so far include expanding compulsory drug stocks, facilitating imports and making it easier for hospitals to produce medicine themselves, the paper reported.