Intense two-day deliberations are over with an expert panel crowning one cheese among hundreds of candidates as Switzerland’s finest.

Let’s face it: there is no such thing as bad Swiss cheese, just as there isn’t bad Swiss chocolate.

Even if you are not fond of one variety, someone else will swear by it. So, the process of selecting the ‘best’ cheese is a matter of pitting one excellent cheese against another.

On Thursday and Friday, cheese connoisseurs did just that.

Gathered in the Valais community of Val de Bagnes for The Swiss Cheese Championships, the jury had the painstaking task of tasting more than 1,000 cheeses in 32 categories — including hard, semi-soft, rindless, and others — and rating each one on terms of its taste, appearance, aroma, and texture (and no, the size of holes was not among the criteria).

The competition was tense, but by the end of the day, the jury finally revealed its ruling.

And the big cheese is….

… a Gruyère, which is recognisable by its solid yellow colour and taste that ranges from sharp to mild.

Now, if you live in Switzerland and know a thing or two about cheeses, you also know that this particular one comes from its namesake region in the canton of Fribourg. It is manufactured entirely from the milk of cows that graze the local pastures. 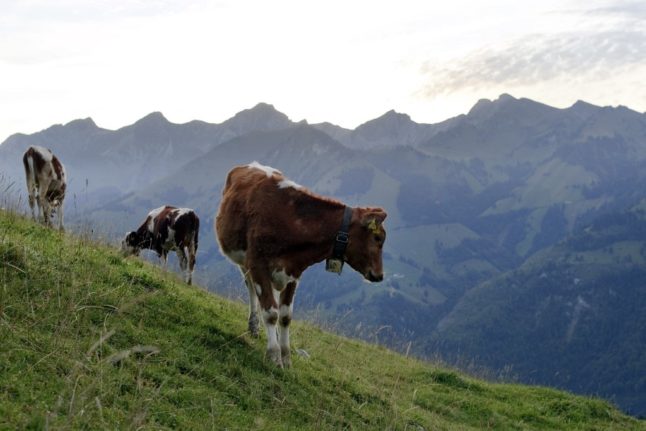 Cows graze in the mountain pasture in Gruyères, Photo by FABRICE COFFRINI / AFP

There is also a Gruyère manufactured in France — which the Swiss look down upon — and even one from America, that the Swiss say is “not really cheese”.

A US court ruled in January 2022 that ‘Gruyere cheese’ does not have to come from the Gruyères region — or even from Switzerland, for that matter — in order to bear the name.

Within Switzerland’s Gruyère region itself, there is a number of small manufacturers who produce these cheeses to the traditional, ancestral recipe in village dairies.

The one that was crowned on Friday as ‘the best” is from a dairy-cheese factory in the village of Montbovon.