Switzerland is a country with many immigrants, but not necessarily an easy place to integrate. One canton has an integration program that helps immigrants learn about the country and make local friends, as writer Ashley Franzen experienced.

There are many things to prepare for when making an international move: packing, paperwork, scheduling the move, and more. It can be a lot for anyone to manage, but sometimes the hardest work comes once you’ve actually arrived and are getting settled. So how does one prepare for arriving and integrating into a country where everything is so different and new?

Canton Zug has put together an integration plan that helps families learn about their new surroundings, including an informational evening program where new arrivals can attend sessions and learn about Zug's political, social, and cultural landscapes, all while socialising and meeting other new residents.

According to the Canton of Zug’s website, “Integration is an active and reciprocal process between the people who come from foreign countries to live here and the indigenous people.

"The aim of integration is a peaceful coexistence on the basis of common values so that people who come here from foreign countries may have the equal opportunity to take part in Switzerland's social, cultural and political life.”

Chocolate and new friends: my experience with 'New in Zug'

I found out about the “New in Zug” program, which offers a series of sessions on different topics, towards the end of the scheduled agenda. Still, I was able to attend a session led by an Immigration Advisory Center (FMZ) consultant and a local police officer who had been working in Zug for nearly 25 years. There were about eight of us in attendance.

This particular course was actually a mixture of the German and English languages, as we all had a basic level of German, but we found out that English was the uniting language otherwise.

It was a valuable and informative couple of hours and there were light refreshments, including water and chocolates. In addition, I was able to connect with someone who was part of a local international women’s group and gained a bit more information about other ways to integrate.

READ ALSO: REVEALED: Are these the ‘best’ places to live in Switzerland?

There are many international groups that are running in places like Zug, Lucerne, and Zurich, but this is a unique opportunity to connect with the local services and locals involved in promoting integration.

My family also participated in a hosting program. Local families volunteer to be paired with recently arrived families - such as mine - in order to help give a new perspective of your new city in ways that a local does, with tips and suggestions to make you feel more at home.

We were paired with a couple that had been in Zug for over ten years. They were similar in age to us and their two kids were within a year or two of our own. We had an initial video meeting to chat and get to know one another a bit before we decided to try and meet up. 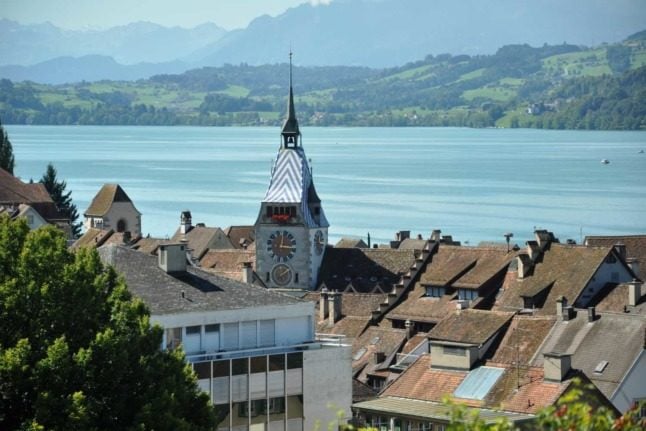 View over Lake Zug with the old town of Zug and the Zytturm. By Schulerst - CC BY-SA 3.0, Wikicommons

We met down near Lake Zug and walked through a market/festival set-up along the promenade. It was wintertime and very cold, but the kids were delighted to be with kids their age who spoke some English. There were many activities in which they could partake, including a mini train ride, and they seemed to enjoy themselves.

Having a local family on-hand to call with questions about family services, including daycare or other programs, was an asset to our family. We received recommendations about various things to do as a family, including local destinations that were good for day trips and rainy days.

Overall, my experience with the FMZ and their programs was extremely positive. Their office is close to public transportation and a short walk from the lake. While I’ve continued to explore Zug and the surrounding areas on my own, I know that the local government provides access to helpful and unique resources to help develop my relationship with the canton and the country.

As a foreigner living in Switzerland, I already feel a sense of pride with regard to the various cultural and traditional activities and perspectives, such as the quality of food, the work-life balance, and the deeply ingrained social trust. I fully intend to continue integrating with clubs and activities that promote a connection between local and foreign people and promote a closeness to the vast beauty that is now “in my backyard” in Switzerland.

The Immigration Advisory Center (FMZ), or in German, Fachstelle Migration Zug, is a rich resource for people looking to get connected in their new city. The FMZ offers “New in Zug” and various other introductory meeting sessions that introduce residents to things such as local laws, individual rights, and customs of residing in the area.

They can also help you start German classes and provide answers about life in Zug in 16 different languages. The Center not only offers courses in German and language tests, but they also have classes about Swiss culture and traditions, plus smart ways to meet new people.

The New in Zug Together program is a series of sessions where you can learn about Zug. An FMZ consultant guides the meet-ups and the theme will vary for each session. Possible topics include authorities, work, insurance, health, cultural differences, and more.

There are sessions in both English and German, so as you improve your German, you can branch out and meet people in a German-speaking environment.