Just how good are the Swiss at speaking different languages?

Switzerland has four national languages, with three being spoken extensively in various regions. But do residents of any cantons or cities speak multiple languages?

Many people living abroad who have never visited Switzerland are astonished to learn that this tiny country doesn’t have a single ‘Swiss’ language.

They may not realise that having all 8.7 million people speak the same language would be just too simple.

While this may be a head-scratcher for foreigners, nobody born and raised in Switzerland is bothered by having four linguistic regions. If they were, they would probably have launched a referendum to have this changed, but so far that has not happened.

As it is, 62.6 percent of residents speak Swiss-German, 22.9 percent are French-speakers, 8.2 percent speak Italian, 0.5 percent Romansh.

READ ALSO: Romansch - What you should know about Switzerland's fourth language

The languages spoken in each canton depend largely on the geographical boundaries of Switzerland and the influence of the countries nearest to them.

As different regions of Switzerland and neighbour countries became annexed and blended together throughout the centuries, linguistic identities were forged as well.

However, this doesn’t mean that the linguistic designations of cantons have never changed?

In fact, some 83 Swiss communes have changed their official languages between 1860 and 2000.

This happened independently of which linguistic region they are part of, for reasons that include demographic makeup.

Are some cantons / cities bilingual?

Four cantons — Bern, Fribourg, Valais and Graubünden — as well as the city of Biel/Bienne (in canton Bern) are officially bilingual.

In Bern, Fribourg, and Valais, German and French are both official languages under the Swiss constitution. There are a number of bilingual towns and villages in each of these cantons, but the proportion of residents speaking each of the languages differs.

In Fribourg and Valais, for instance, French prevails, while in Bern, the majority of residents are German-speakers.

As for the town of Biel / Bienne, a slight majority (56.6 percent) speak German as their main language and 43.4 are French-speakers. This means you will be able to communicate in either of the two languages while in this city.

Another town that uses both German and French is Basel.

While it is not officially bilingual, the city shares a border with both Germany and France, and a number of cross-border commuters from each country are employed is Basel.

It is the only trilingual canton.

Among the population living in Graubünden, 64 percent speak German, 13 percent Romansh, 11 percent Italian, and the remaining 12 percent use other regional languages.

It is a good bet that if you live in, or travel through, these regions, you will be able to communicate in all these languages — if you speak any of them, that is.

What about the other 22 cantons?

Observational evidence indicates that while a number of people in exclusively German-language cantons will speak at least some French, don’t expect French-speakers to communicate with you in German.

This is not necessarily because they don’t speak it; kids in French cantons learn German in school, and vice-versa, so they have at least a basic knowledge of the language.

The real reason is that — as they will likely tell you themselves — they just don’t like speaking (Swiss) German.

So are Swiss people themselves all bilingual? 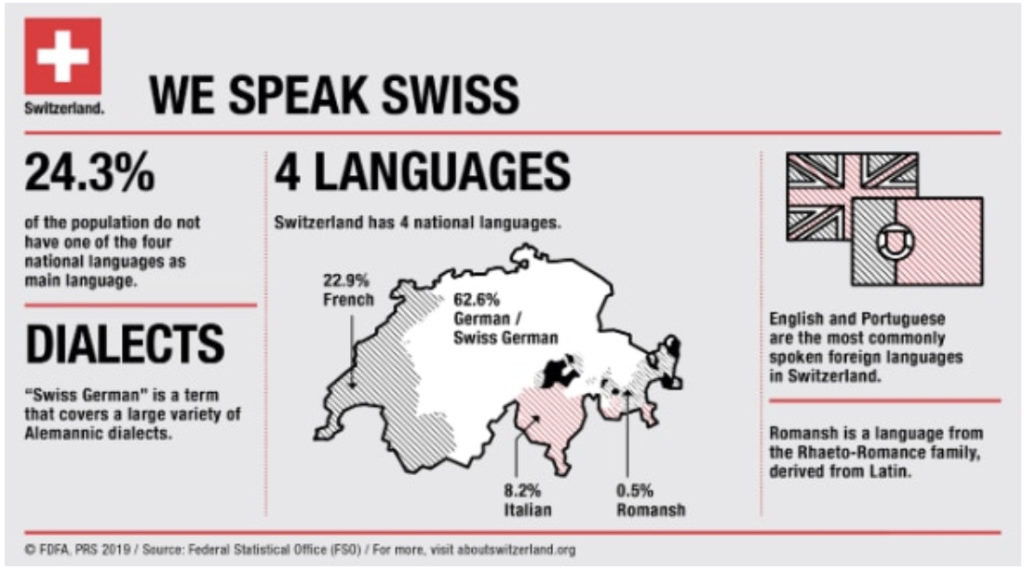 Credit: The Federal Council.
But that doesn't mean they all speak two or even three of Switzerland's national languages.
A 2016 survey revealed that only 20 percent of German-speakers and 12 percent of Italian-speakers say they use French regularly, whilst 19 percent of French-speakers regularly use German and 11 percent Italian.

So how do all these people living in the same country normally with each other?

The answer is simple: in English — the most commonly spoken non-national language in Switzerland.

It is regularly spoken by 45 percent of the population in Switzerland although it is more prevalent in German parts of the country than French and Italian. It is much more widely spoken in Switzerland's big cities such as Geneva and Zurich.

Whatever region of Switzerland you are in, you will more likely find people willing to speak English than the other national language(s).

In fact, not being proficient in English in this day and age can be a definite setback, both in terms of social and professional life.

The 2022 EF English Proficiency Index found that the Swiss have a 'high proficiency' level of English, ranking 29th in the world.

The ranking is based on test results of more than two million adults in 111 countries and regions. Switzerland scored 563 points out of a total of 700 possible points in the index. The Netherlands took the top spot with 661 points.

As a matter of fact, a command of English is expected in Swiss business and politics - including for a Swiss president.

Former president Guy Parmelin (whose native language is French) was a laughing stock when a reporter asked him whether he spoke English. His answer:

English is not the only non-national language spoken in Switzerland.

The younger generation are also regularly in contact with many other languages, including Albanian (6.7%), Portuguese (4.9%), Spanish (4.9%), Bosnian, Croatian, Montenegrin or Serbian (3.8 percent), Turkish (2.8 percent).