The cost of riding the Léman Express, a regional train that connects border areas of Switzerland and France, will likely go up in 2023.

Europe’s largest cross-border rail network, which is widely used by French workers who commute to their jobs in the Lake Geneva region, could  increase the prices of passes and single journey-tickets by about 3 and 8 percent, respectively.

It is not yet clear exactly how much more the commuters in each tariff zone along the 230 km of track will have to pay, or when the hike will go into effect — on January 1st or later in 2023.

More information about the current tickets and passes can be found here.

A collaboration between the Swiss Federal Railways (SBB) and France’s SNCF, the Léman Express network of 40 trains spans 45 stations  between the Swiss cantons of Geneva and Vaud and the French departments of Ain and Haute-Savoie. 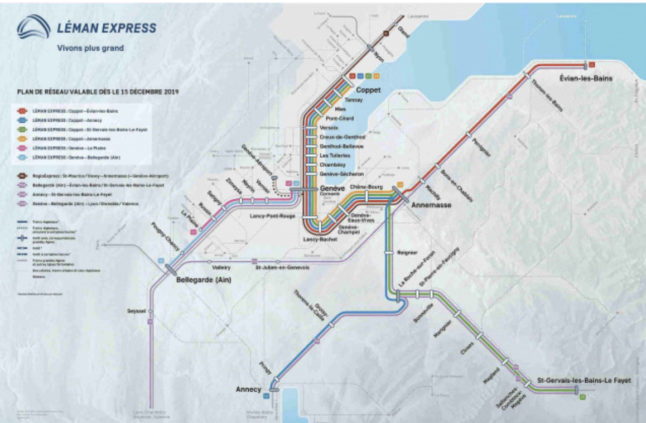 The network was inaugurated in December 2019 with the goal of reducing journey times and cutting traffic in and around Geneva, while allowing thousands of cross-border workers from France to quicker access their Swiss jobs.

Beyond its primary task of transporting commuters and reducing traffic congestion around Geneva, Léman Express’ goal is also to create a sense of regional identity which spans cantonal and national borders.

However, the network has also had a less beneficial effect on the region’s residents: it has caused rents and property prices on both sides of the border to rise sharply.

These costs have risen by 8 to 9 percent on average — a sharper increase than elsewhere in the region.

READ MORE: How a cross-border train has pushed house prices up in Switzerland and France