Why you shouldn't expect the Swiss to speak English to you

Some foreigners may find it difficult to learn one of Switzerland’s official languages, while others don’t even try to do so, thinking they can get by just fine in English. But is it really so?

Yes, Switzerland is a multilingual country, but English is not one of its four official languages — even though, as we explain below, it's almost the unofficial second language of many.

What’s more, Swiss linguistic regions — German, French, Italian, and Romansh — are well defined, and there is no more space in this small country to fit in yet another language, or it may just burst at the seams.

READ MORE:  How did Switzerland become a country with four languages?

Yet, as an abundance of anecdotal and observational evidence indicates, many English-speakers who live in Switzerland never bother to master the language of their region, believing (or perhaps hoping) that everyone they come in contact with will be fluent in English.

This is perhaps specificity of English speakers; you don’t see many (probably any) foreigners who automatically assume the Swiss will speak to them in Greek, or Polish, or any other non-national language.

However, not making an effort to learn a local language and depend only on English to communicate in a country that is not primarily anglophone is a bad idea.

Aside from showing your unwillingness to integrate — which is understandably seen as a huge faux pas in Switzerland — it is also considered disrespectful by most to come to a foreign country and expect people to speak a language that is not theirs just to make it easier and more comfortable for you.

It’s fine if they volunteer to speak English to you, as many will undoubtedly do, but expecting them to do so is different and unlikely to go down well.

READ MORE: EXPLAINED: Just how bilingual are the Swiss?

You are not totally wrong in assuming that many people in Switzerland can communicate with you in English.

A study by the Federal Statistical Office showed that, with about 45 percent of the Swiss population being more or less fluent in English, it is the most spoken non-national language across Switzerland.

In fact, not being proficient in English in this day and age can be a definite setback, both in terms of social and professional life.

Since only 20 percent of German-speakers and 12 percent of Italian-speakers use French regularly, while 19 percent of French-speakers regularly use German and 11 percent Italian, the three linguistic regions most commonly converse with one another in English.

So why shouldn’t you expect the Swiss to speak English to you?

Aside from the reasons mentioned above, the fact is that English, while quite common, is not spoken everywhere in the country.

The largest number of English speakers — and foreigners in general — are living in big Swiss cities and areas surrounding urban centres where most multi-national companies are located.

As this FSO map shows, most English speakers are concentrated in areas marked in darkest colours: Geneva, Zurich, Zug, Basel-City, and Vaud,. 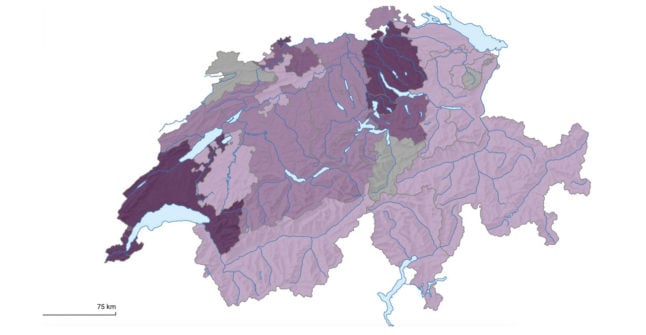 These cantons have not only most native English speakers, but also people in general who speak the language.

Tourist areas, such as mountain resorts and frequently visited regions like Ticino, may also have a good number of English speakers.

However, if you find yourself in small towns or villages, off-the-beaten-path communities, or rural areas that are not located in the vicinity of international cities — large swathes of light-coloured regions  on the above map — then your insistence on speaking English will likely not only be unsuccessful, but also not well seen.

Generally speaking, people living in rural regions are more conservative than their urban counterparts, and will not take kindly to foreigners who dictate their own rules — either in terms of language or otherwise.

READ MORE: Reader question: What does being ‘successfully integrated’ in Switzerland mean?