Why do the Swiss think they are superior to everyone else?

If you have been living in Switzerland, you probably noticed that many people here have a high (some may say too high) opinion of their country. But is this view justified?

Switzerland is a small country surrounded (with the exception of Liechtenstein) by bigger nations. Yet, when it comes to their perception of themselves, the Swiss believe they are far superior to their neighbours and other countries as well.

This self-assessment could be based on a number of international surveys that place Switzerland at the top, or very near the top, in various categories.

For instance, this year alone, Switzerland won the title of the “Best Country in the World” by US News & World Report, and most innovative economy in the world by a United Nations organisation.

It is not wasted on anyone that in all the studies and surveys, whether assessing the quality of life or economy, Switzerland consistently beats the other nation that also thinks very highly of itself — the United States.

The Swiss genuinely believe that they are better than others in many areas.

Their economy is stronger

It is certainly true that Switzerland’s economy is robust.

Its inflation rate, now and generally, is lower than across the eurozone, and its unemployment rate is far below the EU’s as well.

Even during the Covid pandemic in 2020, Switzerland’s economy, while certainly weakened, was still “the most resilient" in the world, according to research conducted at the time.

READ MORE: EXPLAINED: Why is Switzerland so rich?

Whether it's the (mostly) punctual trains or the highly developed and well-maintained infrastructure, Switzerland works like the proverbial Swiss watch.

The Swiss like everything to run smoothly and efficiently, and believe they are better at these skills than other countries - and they probably are.

They tend to look down on countries where these traits fall by the wayside, pointing accusing fingers at the Italians and French (as they usually do when something goes wrong in Switzerland), but also at Germans.

In fact, in 2019, an expansion of the Deutsche Bahn lines into Switzerland met with objections because the Swiss were concerned those tardy Germans would mess up their intricately organised transport systems.

Just as they value efficiency and good organisation, the Swiss also like everything to be balanced and steady (and if possible, predictable) rather than ruled by chaos and randomness.

They believe they have mastered this skill better than anyone else — certainly better than, you guessed it, the French and Italians.

While other nations’ politics are often volatile, Switzerland’s system combines the above-mentioned qualities: efficiency and stability.

Instead of the scandals and general disorder which drive political discourse in many other countries, Swiss cabinet members get along well, with each other, at least in public. Whatever major differences they may have among themselves, they practice the principles of consensus and collegiality. 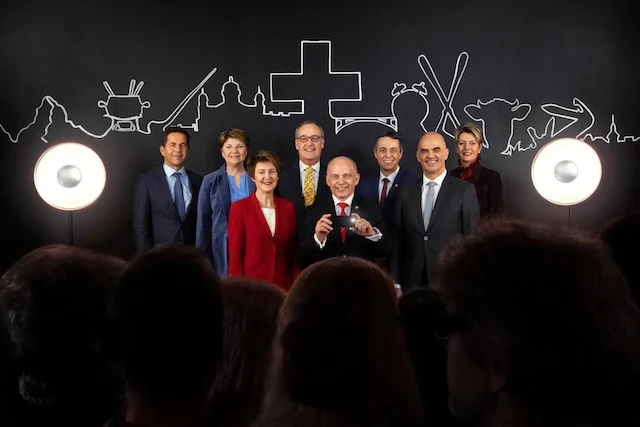 The Swiss credit it on their own unique brand of direct democracy, where the people, rather than elected officials, hold all the power and have the last say in the political processes and decisions that shape their lives.

By going to the polls on average four times a year to cast their votes on various issues of national or local importance, the Swiss genuinely believe they have the best political system in the world.

Speaking more languages than anyone else

As they sometimes like to point out to assert their superiority, the Germans speak German, French speak French, and Italians speak Italian. But the Swiss speak all three — and then some.

While it is true that not every Swiss speaks all three national languages (though some do), most have varying levels of fluency in two, plus at least some English.

To their minds, this multilinguism makes them superior to just about anyone else in Europe, and elsewhere as well.

READ MORE: EXPLAINED: Just how bilingual are the Swiss

Do the Swiss see their negative sides?

Let’s just say that the Swiss don’t believe they are inferior to anyone, least of all to the French and Italians.

If you say otherwise, they will point out that they managed to create a neutral, sovereign, politically and economically stable and prosperous nation while many others haven’t. You can’t really argue with that.

They may also say that if you don’t like their country, you should leave and go live in your own — and you can’t argue with that either.

The only ‘negative’ they may concede is that Switzerland is an expensive country to live in, and that they are not happy with the increasing cost of living.

However, they may also argue that Switzerland’s high wages offset, at least partly, the cost of living.

In fact, there is certain logic in this argument.

An in-depth analysis into the purchasing power parity by a digital employment platform Glassdoor shows that if you look at the ‘big picture’ — taking various factors into account — the cost-of-living situation in Switzerland is not as bad as many people believe.

“Taking not only income and cost of living into account, but also the effects of differences in taxation, it is possible to derive an indication of after-tax, local purchasing-power-based, standard of living”, the study reported.

“Various factors” in this context means the low inflation rate (in comparison with other countries), high employment, and a strong economy — all of which indicate that Switzerland is outperforming other European nations on many fronts.