The Rhaetian Railway (RhB) announced that it had beat the world record for the longest passenger train, at an event marking the 175th anniversary of Switzerland's famous railway system.

The 1,910-metre (6,266-foot) train, composed of 25 separable multiple-unit trains, or 100 coaches, travelled through the Alps in the eastern Swiss canton of Graubunden. 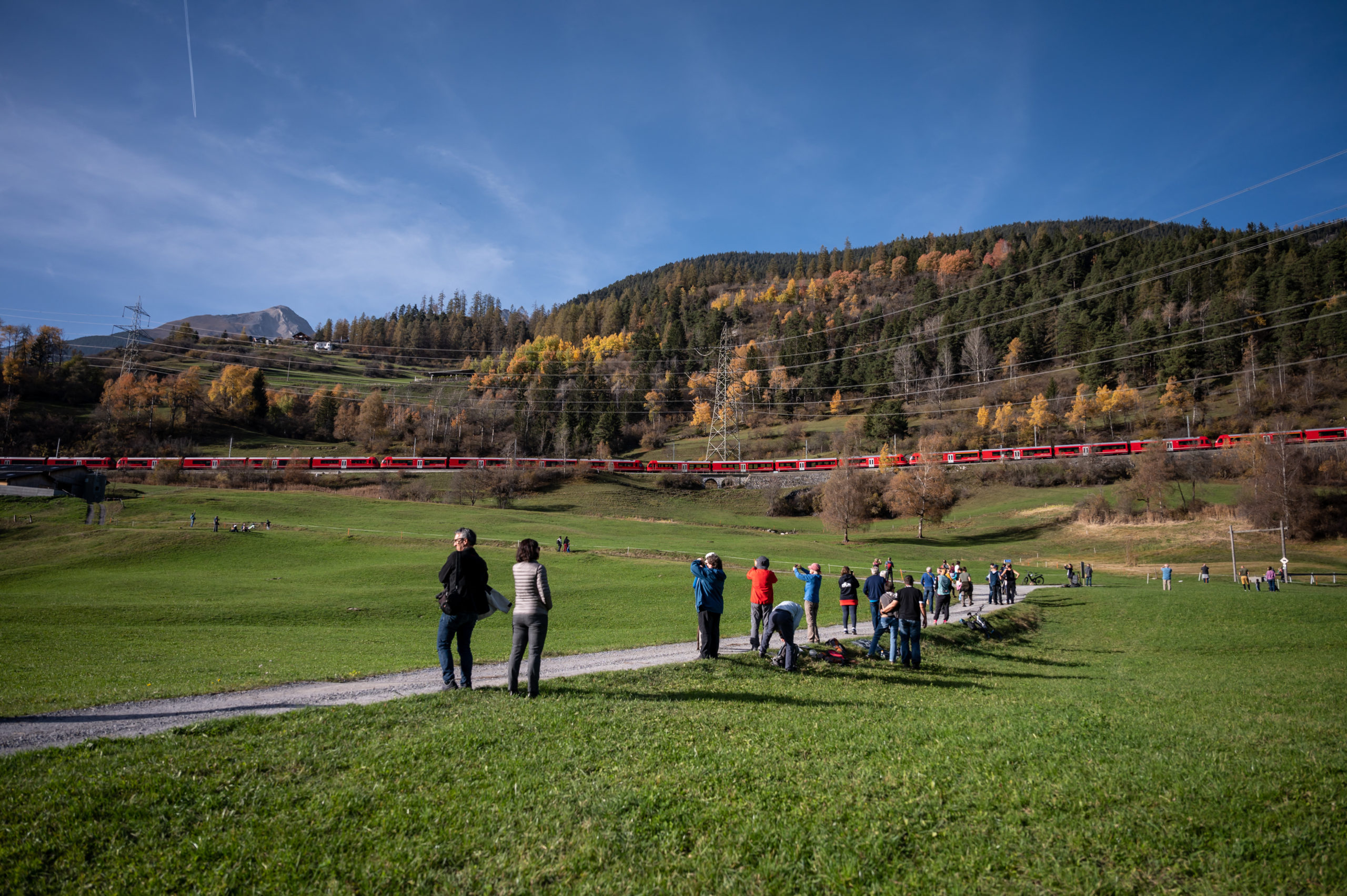 People look on and take photographs as a 1910-metre-long train with 100 cars passes by near Bergun on October 29, 2022, during the world record attempt by the Rhaetian Railway (RhB). (Photo by Fabrice COFFRINI / AFP)

"For me, this is just Swiss perfection," RhB chief Renato Fasciati told the Blick daily's live feed of the event, as the long, red train snaked slowly through the mountainous landscape.

While there are freight trains that are longer, with some measuring over three kilometres, Saturday's event featured by far the longest passenger train ever run.

It was several hundred metres longer than a train that held the unofficial previous record, in Belgium in the 1990s, an RhB spokesman told AFP. 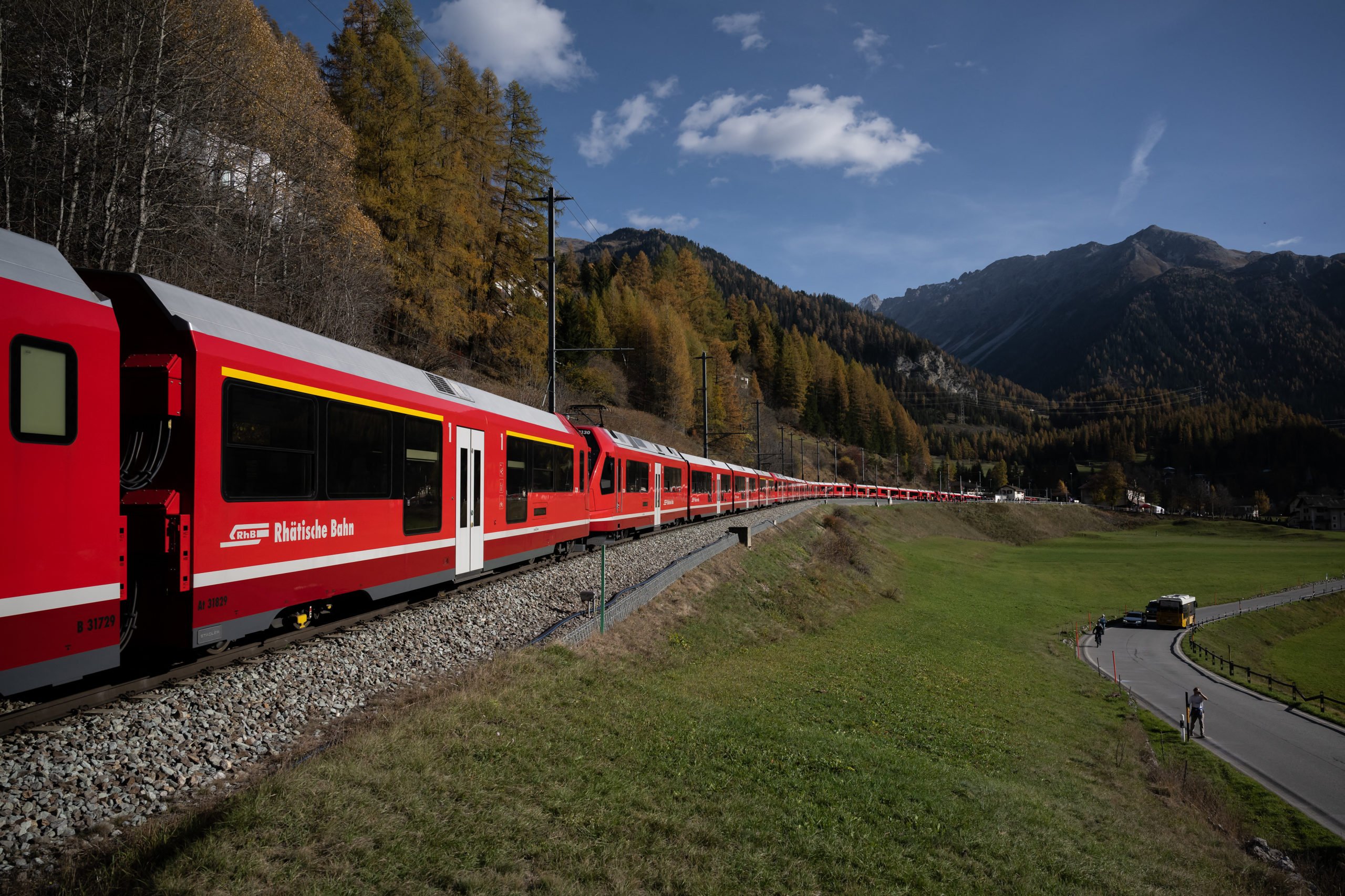 With dazzling sunshine reflecting off its shiny, silver roof and with a digital destination sign on the front reading "Alpine Cruise", the train carried 150 passengers.

It took the spectacular, spiralling Albula/Bernina route, listed as a UNESCO World Heritage site, covering the nearly 25 kilometres from Preda to Alvaneu in less than 45 minutes.

Some 3,000 people who had snapped up coveted tickets, watched the trip on a giant screen set up near Bergun, at the halfway-point in the historic journey. 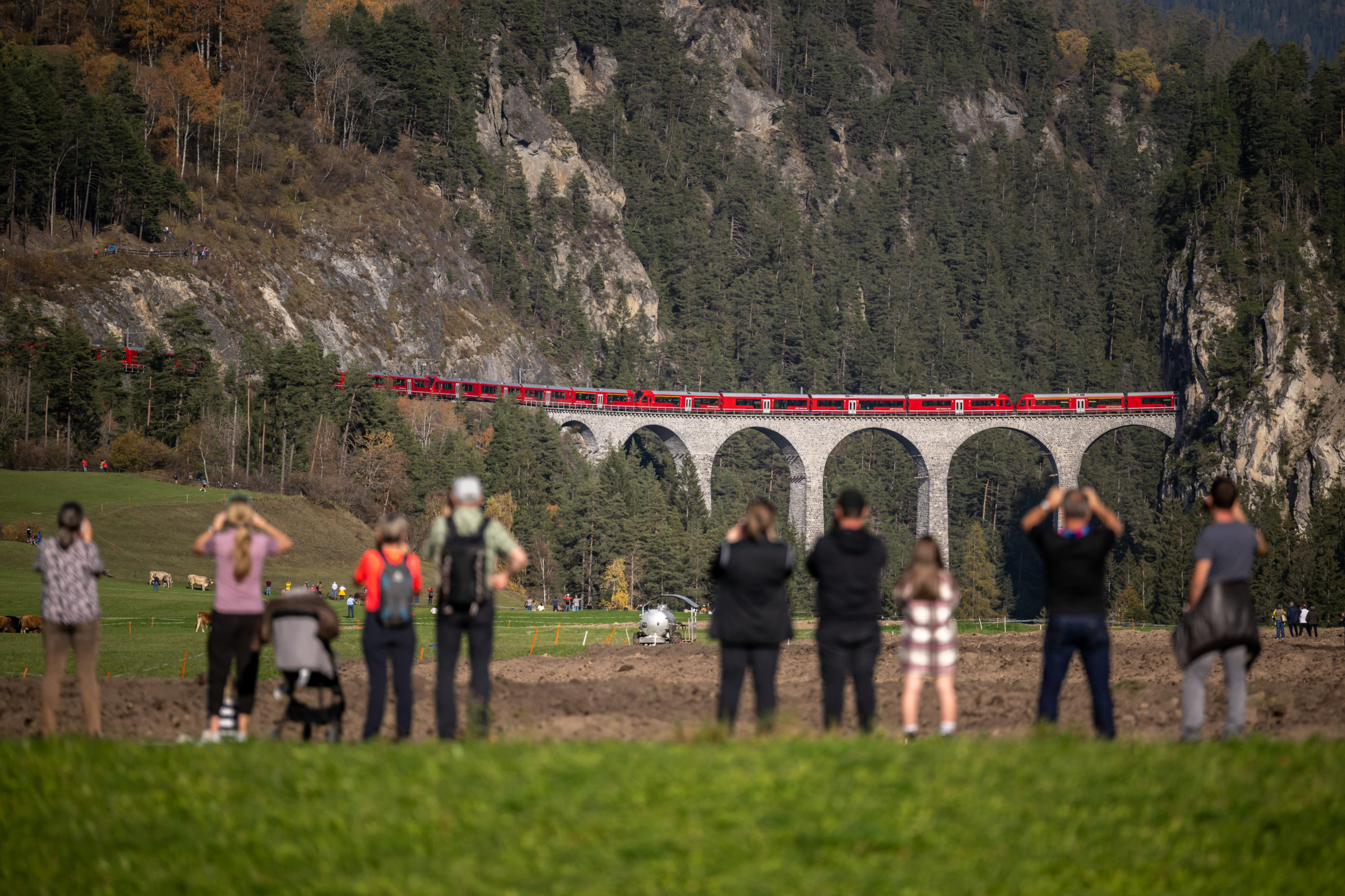 Members of the public capture images as the train passes the Landwasser Viaduct, after Bergun. (Photo by Fabrice COFFRINI / AFP)

Others lined the mountain roads and paths, cheering as the giant train slowly snaked between autumn-coloured trees.

It wound through 22 helical tunnels and crossing 48 bridges along the way, including the majestic Landwasser Viaduct, towering 65 metres over the ravine below.

Swiss media broadcast aerial footage showing the train at several levels simultaneously, with its snout exiting one tunnel as carriages further back were sliding through others.

The road up to the various look-out points was closed off to traffic, but many hiked or biked up the mountainside seeking out the best view.

And as the train made its way down one mountainside, a flock of people on bikes tried to follow alongside it on a parallel path. 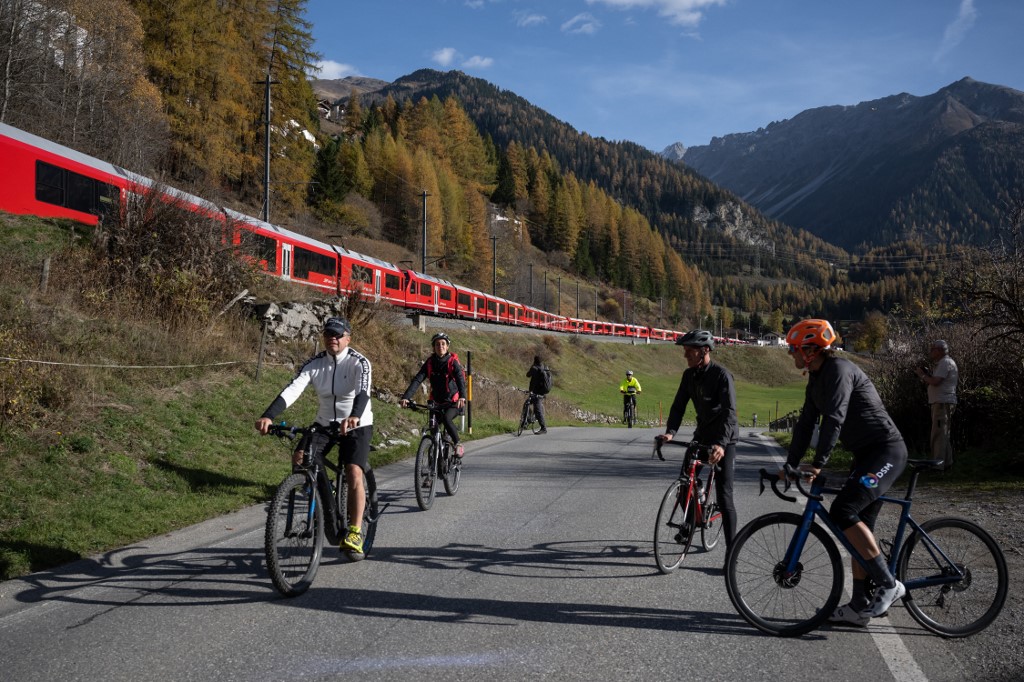 Cyclists watch as the train passes near Bergun. (Photo by Fabrice COFFRINI / AFP)

Holding up the Guinness World Record diploma, Fasciati told reporters that there had been significant challenges to ensure such a long train could travel safely.

The seven train drivers and 21 technicians onboard had to make sure "that all 25 trains do the same, accelerating and breaking" at the same time, and were all "guided by the first... driver," he said. 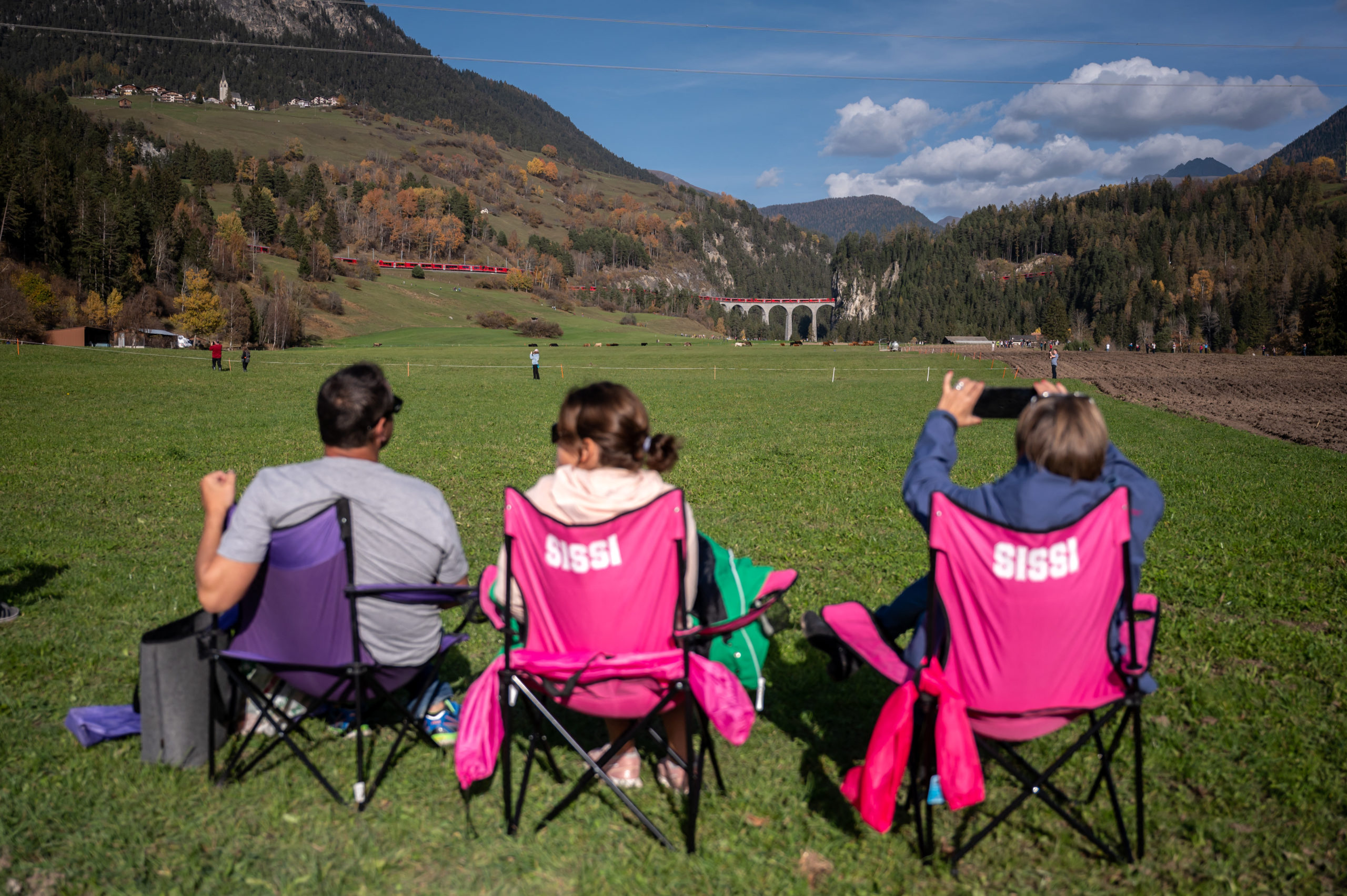 Members of the public capture images as the train passes the Landwasser Viaduct, after Bergun. (Photo by Fabrice COFFRINI / AFP)

Few countries have a rail network as dense as Switzerland, which is famous for its punctual trains.

The wealthy Alpine country saw the departure of its first train service on August 9, 1847, linking Zurich with Baden, 23 kilometres to the northwest -- a trip which took 33 minutes.