Will the warm autumn affect the ski season in Switzerland?

The warmest October in recorded history made for a good hiking weather in the Swiss Alps, but it is proving detrimental to skiing.

The Swiss ski season officially starts in November — and ever earlier in some regions— but many resorts, including those at high altitudes, have not had enough snowfall to date.

The website of the 3000-metre-high resort of Gemsstock, for instance, has a banner saying that “Due to the warm weather conditions, the start of the season is postponed” from October 29th until November 12th.

The situation is the same even in Zermatt, the resort that lies at the foot of the iconic Matterhorn.

At 3,899 metres, it is the highest ski area in Switzerland, where certain slopes are normally open 365 days a year. However, the women's downhill competition scheduled for November 5th and 6th had to be cancelled due to lack of snow.

“We have to watch [the situation] on a day-to-day basis,” said Marc Lagger, spokesman for Zermatt Bergbahnen AG ski lifts. “The opening of the various facilities depends on temperatures and rainfall”.

And even the snow cannons can't solve the problem when it is too warm, Lagger added. 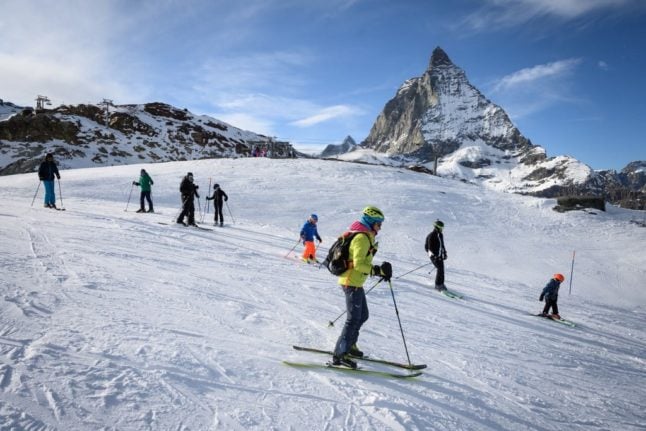 This is what skiing at the foot of the Matterhorn looks like when there's enough snow. Photo: Fabrice Coffrini / AFP

However, Schilthorn, a resort in the Bernese Alps, has found a solution for its snowless slopes: snow-farming — a technique which consists of ‘stocking’ large deposits of snow in the spring and covering them with a plastic film to keep it from melting.

Because of this re-used snow, “the season can start on November 5th”, according to Christoph Egger, director of Schilthornbahn AG ski lift.

"Thanks to this technique, we can lay out the entire track along the Riggli chairlift. In fact, despite the summer heat, only 16 percent of the snowfall has melted”, he said.

But lack of snow is not the only problem skiers are facing in coming months.

Ski passes will cost more during the upcoming ski season due to the soaring energy prices.

A number of resorts have already announced impending price hikes.

READ MORE: Why your ski trip in Switzerland will be more expensive this winter

Another challenge to Swiss ski resorts is a strong franc.

This winter, however, fewer foreign skiers, especially from the EU, are expected to hit Swiss slopes.

The reason is higher-than-usual inflation rate in the eurozone, as well as the strong-franc versus weakened euro exchange rate, which makes skiing in Switzerland too expensive for foreigners.