The number of workers who commute daily from neighbouring countries to their jobs in Switzerland has grown by nearly 6 percent within the past year.

At the end of September, there were approximately 374,000 G-permit holders employed in the country, according to data released by the Federal Statistical Office (FSO) on Thursday.

That is 5.8 percent more than at the same time last year.

Slightly more than half of the cross-border workforce (55.7 percent) live in France, followed by Italy (24 percent), and Germany (17.1 percent).

This FSO chart shows how the number of cross-border workers has grown in the past decade. 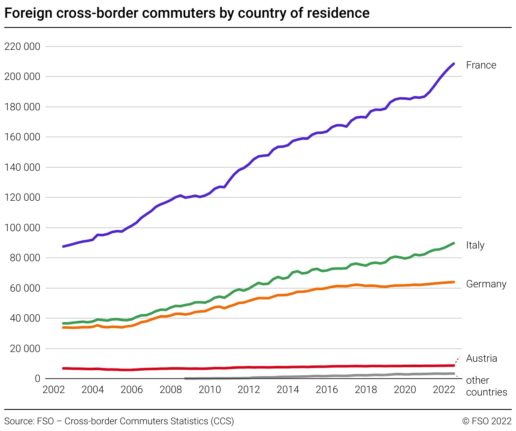 What else the new statistics reveal:

All of the cross-border commuters have a G-permit that is typically valid for five years — unless it’s a temporary contract, in which case it is valid only for the duration of employment. The permits are limited only to the issuing cantons.

However, the fact of merely living in an EU state doesn’t automatically grant the right to work in Switzerland. If you are a citizen of a third nation, you can still apply for a G permit as long as you have been a legal resident of a country adjacent to Switzerland for at least six months.

A cross-border permit does not grant access to permanent residence  (B or C permit), or to Swiss citizenship.