Geneva faces another strike today; EU still considers Switzerland a tax haven; and other news in our roundup on Monday.

Yet another strike disrupts Geneva today

After a two-day industrial action by the city’s public transport employees (TPG) on October 12th and 13th, construction workers will take to the streets from 6:30 this morning.

Because of the procession of strikers through the centre, there will be fewer trams and buses serving the downtown area, and certain routes will be diverted or even cancelled altogether. In all, about 30 percent of the usual lines will be affected.

In its press release, the TPG recommend “avoiding travel to the city centre, favouring the use of the Léman Express, as well as the lines which circulate on the outskirts”.

This TPG map indicates the (darker-coloured) areas of the city that will be impacted by disruptions: 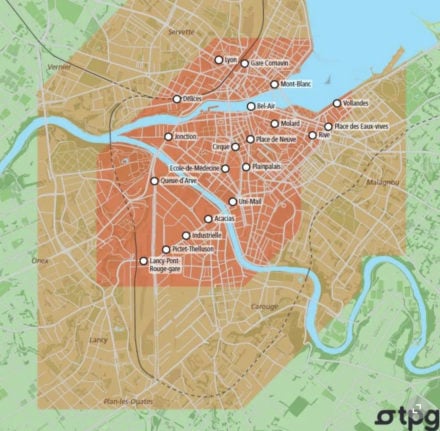 READ MORE: ANALYSIS: Why are workers in Switzerland opting for strike action?

Although some resorts had expressed concern that unseasonably warm October would delay the opening of ski runs due to lack of snow, it turns out that this is not the case — at least in some areas.

As much as 30 cm of snow fell this weekend above 2,000 metres, allowing some resorts to open already.

For instance, 13 of the 31 ski lifts on the Breuil-Cervinia area (VS), at the Matterhorn, are in service.

Two resorts also situated near a glacier, Saas Fee (VS) and Engelberg (OW), opened parts of their ski areas too, in addition to the  Schilthorn, in the Bernese Oberland, and Diavolezza, in the Engadine (GR).

As already announced, skiers can expect higher prices in 2023.

READ MORE:  Why your ski trip in Switzerland will be more expensive this winter

Out of the total of 359 products that had been withdrawn from sale in Switzerland in the three-year period between January 2020 and October 2022, 37 were from from Migros and six from its subsidiary, Denner.

All of them had been recalled due to health or safety hazards.

As a comparison, Coop withdrew nine products during this period, followed by Lidl, with eight.

Migros spokesperson has not shed light on why the company had recalled more products than other retailers, saying only that “irreproachable product quality,  safety and the health of our customers" are at the centre of Migros' quality management.

For the EU, Switzerland remains a haven of tax secrecy

This is the conclusion reached by the delegation from the European Parliament at the end of its two-day visit to Switzerland last week.

Its head, Paul Tang, acknowledged that "Switzerland is moving forward" on the taxation of multinationals, but must make further progress.

“To get rid of this reputation, a country must show that the flows of money coming from people who want to avoid paying taxes no longer pass through it. We need quantified results, which Switzerland is not capable of producing today”, he said.

Switzerland, however, is not the only ‘offender’, Tang pointed out, citing Ireland, Luxembourg and the Netherlands as other tax havens in Europe.