'Grabesruhe': What are Switzerland's strict rules around burials?

Switzerland, as you might expect, has strict rules regarding laying people to rest. They can vary depending on the canton, but Lily Töngi-Andrews explains why people shouldn't expect to rest in eternal peace in Switzerland.

For the unassuming foreigner visiting a Swiss cemetery, they may be surprised to see that many of the headstones will be dated back only 20 to 25 years.

Cremation is the preferred funeral rites in Switzerland, however, earth burials are still a thing – for an alloted time anyway.

More than 80 percent of the deceased, according to the Swiss Funeral Institute, are cremated. Ashes can remain with family members, be scattered over lakes, rivers, favourite mountains, placed in a columbarium or buried in a grave.

READ ALSO: What are the 'five Switzerlands' and what do they represent?

For the remainder who are buried in one of Switzerland’s neat and orderly cemeteries, it is not always their final resting place, thanks to Grabesruhe.

Grabesruhe translates as graveside rest and means there is a time limit to people's 'eternal' resting peace.

From canton to canton the graveside rest period ranges from 20 to 30 years for the majority of adults that have been placed in a line or row grave – the next grave in line in a public graveyard – and are usually a cost-free option. 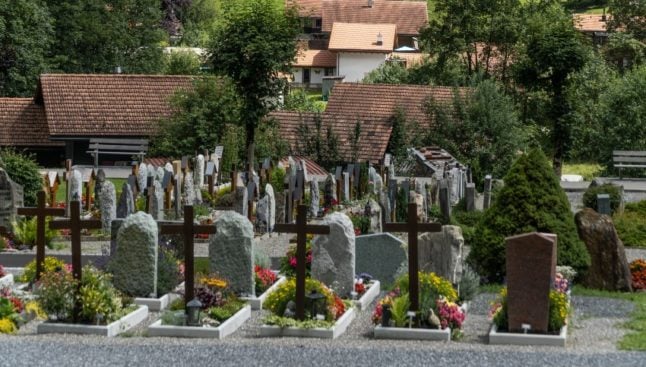 A graveyard in Lauterbrunnen, Canton of Bern. Photo by Mortaza Shahed on Unsplash

Children under 12 years of age have a rest period of between 10 and 15 years, and children under six have eight years. Urns that have been buried are generally left for 10 years before they are removed or covered over. In some cantons it is 15 - 20 years.

Once the time has expired the remains are dealt with according to cantonal regulations. Notices are erected next to the plots to be recycled to advise visiting families that they can clear the graves if they wish. The notices are generally there for a year. Notices are also put in the official gazette. Some relatives may be written to directly if an address can be found.

After the interested parties remove gravestones, plants, adornments, pictures and crosses, the stones that are not taken will automatically be removed by the municipality and ground into coarse gravel for the walkways. The majority of graves are recycled by the cemetery garderners rather than removed by families.

What happens in different areas?

Frau Nicole Waldispühl, from the Friedental Friedhof in Lucerne, advised that at Friedental the remains are left in the grave and new bodies, or urns, are buried on top.

Many private graves remain for longer periods, particularly family graves, as they are paid by family members for an intitial 25 years and then renewable for 5 – 25 years or multiples of 25 years. One family grave has recently been paid to the year 2100. Other graves, once they have received Erhaltungswert, a conservation value, or heritage listing, are allowed to remain where upkeep is taken over by the cemetery/state.

Heritage listed graves that remain undisturbed contain famous people and those that have cultural, commercial, artistic, political and/or beatific value for the cemetery and municipality. Frau Waldispühl said that there are 1,200 graves at Friedental that have been heritage listed.

Other municipalities around Lake Zurich sow the cleared fields with grass and leave them unused for 10 to 20 years. When the fields are reused, graves are then placed according to ‘alternate use’, where an urn burial site becomes a coffin burial site and vice versa. Depending on land available, some fields may be left for 60 to 80 years before reuse.

In some burial grounds, bones and urns are removed, reburied in a communal grave or at the bottom of the new graves interred. Exhumation of the bodies is done en masse and in accordance with health authorities.

In municipalities in Bern, there are communal graves for those who don’t wish to be cremated but buried with no gravestones, plants or memorials. For a fee, names can be added to posts to the side of the plot.

In some cantons, for example Valais, it was common for the bones to be removed from the graves and stored in ossuaries that can still be visited – the most famous is at the Leuk charnel house.

As society moves away from traditional burials, in part due to availability of land and cost, Grabesruhe remains Swiss and efficient.

It does leave the question of how long is long enough for grieving families, and is the peace of the dead observed as bodies are exhumed, or new bodies buried on top, or even as ashes are scattered to the wind?