Geneva is dealing with a wave of viruses, the price of natural gas is soaring, and other news from Switzerland's second-largest city.

Geneva is in throes of three epidemics

Increasing numbers of Covid, flu, and bronchiolitis are putting the canton’s healthcare system under strain.

“We have the impression that everyone is getting sick, and hospital emergency services are submerged,” according to Michel Matter, president of the Association of Doctors of the Canton of Geneva (AMGe).

While various viruses typically emerge at this time of year, “the 2022 edition is stronger," as the three illnesses have emerged concurrently.

The reason, according to experts, is that general immunity to viruses is lower this year; also, not enough people have gotten a flu vaccine and the bivalent Covid booster.

The price of natural gas set to increase by 16 percent

Geneva residents who depend on gas will pay more for it in 2023, Geneva Industrial Services (GIS) announced on Friday.

The new hike follows an increase that went into effect last May, which means the price of gas in the canton has increased by 55 percent in less than a year.

GIS staggers its purchases of natural gas on the futures markets, with its costs jumping by 70 percent between 2022 and 2023.

The company was forced to buy gas at an "unusually high price" to be able to supply its customers throughout the winter, it said.

Geneva: ‘A resilient economy in a gloomy context’

Despite the uncertainties and the series of crises on the geopolitical and energy front, the Geneva economy is expected to grow slightly and inflation to slow down in 2023, according to an analysis carried out by the Banque Cantonale de Genève (BCGE).

“We could see the glass half full or half empty. But we have chosen to focus on resilience factors,” said Valérie Lemaigre, the bank’s chief economist.

On the positive side, Geneva’s growth will reach levels similar to those the pandemic.

Also, the inflation will subside, “partly explained by the absence of generalised indexation of wages, which prevents the economy from being caught in a spiral of rising prices,” Lemaigre pointed out.

Renovation works at the Geneva-Airport train station are completed

The 40-million-franc project that has begun at Geneva-Airport SBB station in September 2020 is now finished, with the platforms sporting a “cleaner,” brighter, and more modern look.

The platforms, in particular, have been raised to provide more comfort for entering the trains, particularly for people with disabilities, families with pushchairs, and travellers with suitcases.

The tracks have been renewed as well, and the ceiling now features images of Swiss Alps. 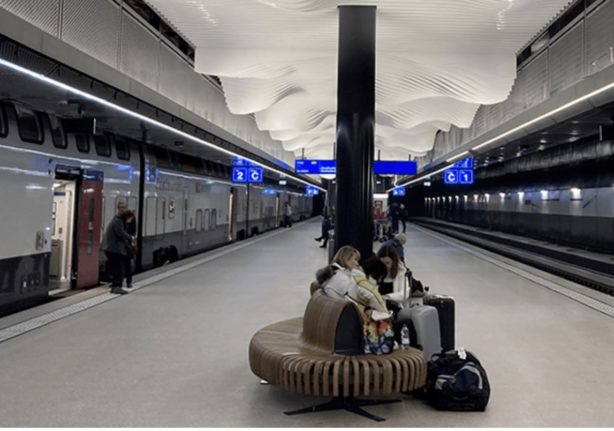 Geneva-Airport station is currently served by five trains per hour and per direction.

Since the introduction of the new SBB timetable on December 11th, an additional train (Regioexpress) stops there once an hour on weekends as well, bringing commuters from Bex, Villeneuve, Renens, Allaman, Rolle, Gland and Coppet directly to the airport, without having to change trains.