EXPLAINED: The Swiss regions being hit hardest by the flu wave

Respiratory viruses are causing major problems in Switzerland this winter. Here's where the flu wave is strongest, and the advice from authorities on dealing with the winter virus waves.

Picking up a virus is not unusual, especially during the cold weather months.

But this year experts in Switzerland say an increasing numbers of illnesses like flu, Covid, respiratory syncytial virus (RSV) and bronchiolitis are putting the healthcare system under strain.

Experts say that general immunity to viruses is lower this year following Covid pandemic protective measures, and that not enough people have received the flu vaccine and the bivalent Covid booster.

READ ALSO: EXPLAINED: How to get the flu vaccine in Switzerland

Where is the flu wave hitting hardest?

On Thursday, the Swiss government published its latest situation report on seasonal influenza. In most regions, the numbers continue to show an upward trend.

According to the figures, northwestern and southeastern Switzerland are being hit hardest by the flu wave. It's particularly bad in the regions of Aargau, Basel and Solothurn. In most other regions, a "widespread distribution of flu" is being recorded.

Northwestern and southeastern Switzerland are currently being hit hardest by the flu wave. Flu activity is increasing in almost all regions of Switzerland - except in the cantons of Basel-Stadt, Basel-Landschaft, Solothurn and Aargau, where a steady trend has been recorded.

The fewest consultations for flu were reported in the regions of Bern, Fribourg and Jura. 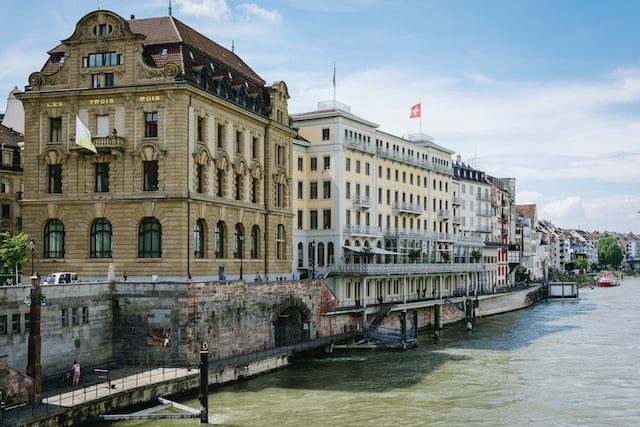 A view of Basel. The city has a high proportion of flu cases. Photo by Chris Boese on Unsplash

The viruses most frequently detected by the National Reference Centre for Influenza (NCI) in week 50 (from December 12th) were influenza and Covid-19.

The mandatory reporting system shows a doubling of case numbers within a week for the second week in a row. Meanwhile, case numbers for this year have already reached the flu season peaks of both previous flu seasons.

Flu is present in all age groups, but is particularly prevalent at the moment in the 5-14-year-olds age group.

The least affected by flu are those over 65. For this group there is a recommendation for a seasonal flu vaccination.

Apart from newborns to four-year-olds, flu cases are on the rise in Switzerland.

Earlier in December, Swiss authorities said they were already seeing a sharp hike in flu cases and expected the situation to worsen.

“We are expecting a stronger flu wave," said Huldrych Günthard, an infectiologist at the University Hospital in Zurich, adding that doctors are expecting “above-average number of severe flu cases".

'Tip of the iceberg'

Laboratories are required to report all positive influenza detections to the Federal Office of Public Health (FOPH), but not everyone is tested or reports their symptoms.

"Since not all people who fall ill with flu-like symptoms consult a doctor and not all who consult a doctor are also tested, the figures from the reporting system represent only the tip of the iceberg," says the government.

Flu-like illness is understood to mean the sudden onset of a high fever above 38C as well as a cough or sore throat.

Earlier this week, Michel Matter, president of the Association of Doctors of the Canton of Geneva (AMGe), talked about the problems of the current viruses circulating.

“We have the impression that everyone is getting sick, and hospital emergency services are submerged,” he said.

While various viruses typically emerge at this time of year, “the 2022 edition is stronger," as the three illnesses have emerged concurrently, he added.

Health departments in Swiss cantons have been issuing tips to residents. For instance, the canton of Bern has urged residents to take care against illnesses like flu, Covid-19 and RSV.

The RS virus is the most common cause of acute bronchitis (an inflammation of the lower respiratory tract) in young children. In one to two percent of cases, it can lead to hospitalisation, according to experts in Bern.

The Canton of Bern's Cantonal Medical Service (KAD) is asking the population to behave "carefully and considerately" during the coming festive season. They have urged people to wear a mask if they have any cold or flu symptoms, and to take extra care to wash hands carefully.

The KAD also recommends getting vaccinated against the flu and Covid-19.

READ ALSO: EXPLAINED: How to get the flu vaccine in Switzerland