EXPLAINED: How immigration is impacting Switzerland

As Switzerland’s population is set to reach the 9 million mark sooner than originally thought, debates around the issue of immigration, and its effects on the country, are intensifying.

Since the introduction of the Free Movement of Persons agreement in 2002, allowing EU citizens nearly unlimited access to the Swiss labour market, Switzerland’s population has grown significantly thanks to strong immigration.

At the end of September 2022, the country had over 8.9 million residents. It should cross the 9 million mark in 2023 — an increase exceeding that of neighbouring countries.

As a comparison, in 2001, a year before the agreement went into effect, Switzerland’s population was 7.25 million.

"The situation is clear: population growth is accelerating and the milestone of 9 million inhabitants should be reached in 2023, three years ahead of forecasts,” according to public broadcaster RTS.

“Switzerland has been in a situation of uninterrupted demographic growth for several decades, and this is explained in particular by the arrival of young migrants, who also contribute to the Swiss birth rate," Philippe Wanner, professor at the Institute of Demography and Social Economics at the University of Geneva told The Local.

In fact, data from the Federal Statistical Office (FSO) indicates that in the past decade the foreign population has grown, while the overall number of people without the migration background has dropped.

As this FSO chart shows, Italian, German, Portuguese and French nationals comprise the majority of immigrants. 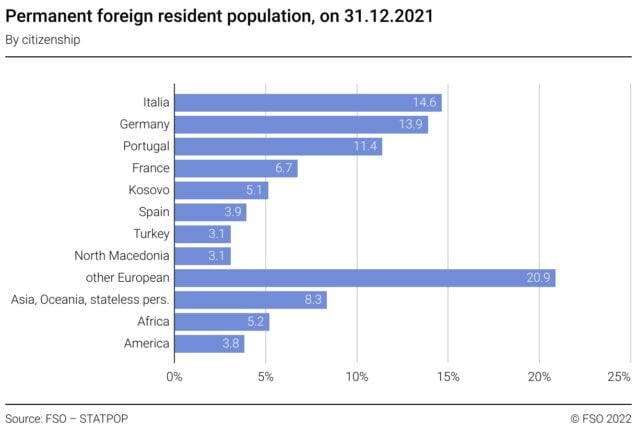 "Switzerland undoubtedly benefits from immigration, but this comes with disadvantages and costs," according to economic historian Tobias Straumann.

So the answer to the often-asked question of how such a “growth spurt” is — and will continue to — impact Switzerland depends on who you ask.

Not surprisingly, populist circles point out that Switzerland is a small country, and such a massive influx of immigrants will “severely strain” the country’s infrastructure and resources, including the already scarce housing supply.

"We can feel this everywhere: on the roads, in the schools, with energy consumption, and food supply," Thomas Aeschi, a deputy from the right-wing Swiss People’s Party (SVP) said in an interview with Neue Zürcher Zeitung. 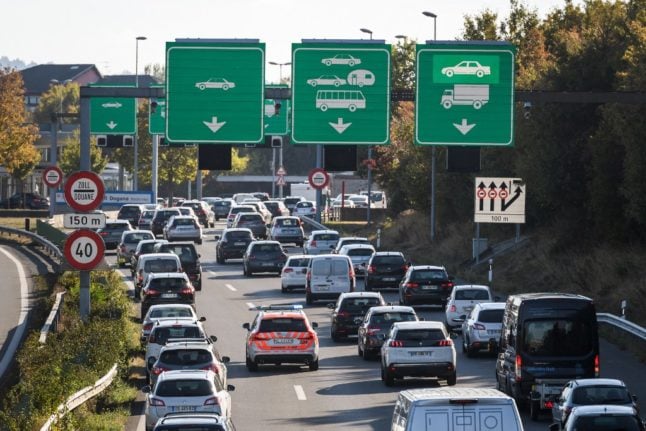 To counter this trend, the SVP is planning a new anti-immigration vote, which it calls the “sustainability initiative". Its aim is to force the Federal Council to limit immigration should the permanent population exceed 9 million people.

Positive impact on the labour market

On the other hand, many in Switzerland see growing immigration in a positive light.

“The country's economic growth is not possible without it,” said Simon Wey, chief economist at the Swiss Employers' Union. “We need immigration if we want to maintain our level of prosperity."

Michel Oris, a demographer at the University of Geneva, pointed out that almost 60 percent of recent immigrants have a university degree and "they are here to fill in the gaps in high-skilled positions".

In terms of immigrants helping to push the population over the 9 million mark, Oris said the country "expected to reach these figures next year or the year after".

He added: "This is part of the continuity of a history of population growth since the second world war.”

As far as immigrants straining the country’s infrastructures, as the SVP claims, "we are very far from it," Oris said.

Meanwhile, according to experts, over the past 30 years, the number of hours worked per inhabitant has shown a significant decline as Swiss people have opted for more part-time jobs in favour of more holidays and free time to enjoy.

Michael Siegenthaler, market expert at the Economic Research Center (KOF) at ETH Zurich, reasons that it is essentially Switzerland’s prosperity that functions as one of the drivers of immigration. “Because we work less, we need more employees," he told Blick.

It stands to reason then that without skilled non-Swiss workers, which are still highly in demand across the country, Swiss companies would not have seen the success over the last three decades that they have – assuming a significant amount of its skilled staff came from abroad.