What is Aromat and why are the Swiss so obsessed with it?

Nothing screams Switzerland more than Toblerone, Matterhorn but what about the hugely popular Aromat? And why are the Swiss so obsessed with this all-purpose food seasoning?

Swiss people living abroad often ask for souvenirs from visitors that remind them of their homeland. In addition to quality chocolate and fondue cheese, there is a small yellow tin adorned with a red dwarf - known locally as Knorrli – Swiss people are known to love so much, it frequently accompanies them on holiday abroad.

The Swiss love their Aromat seasoning so much that there’s hardly a household that doesn’t keep it on their spice rack.

Some people even carry it with them when they eat out at restaurants. 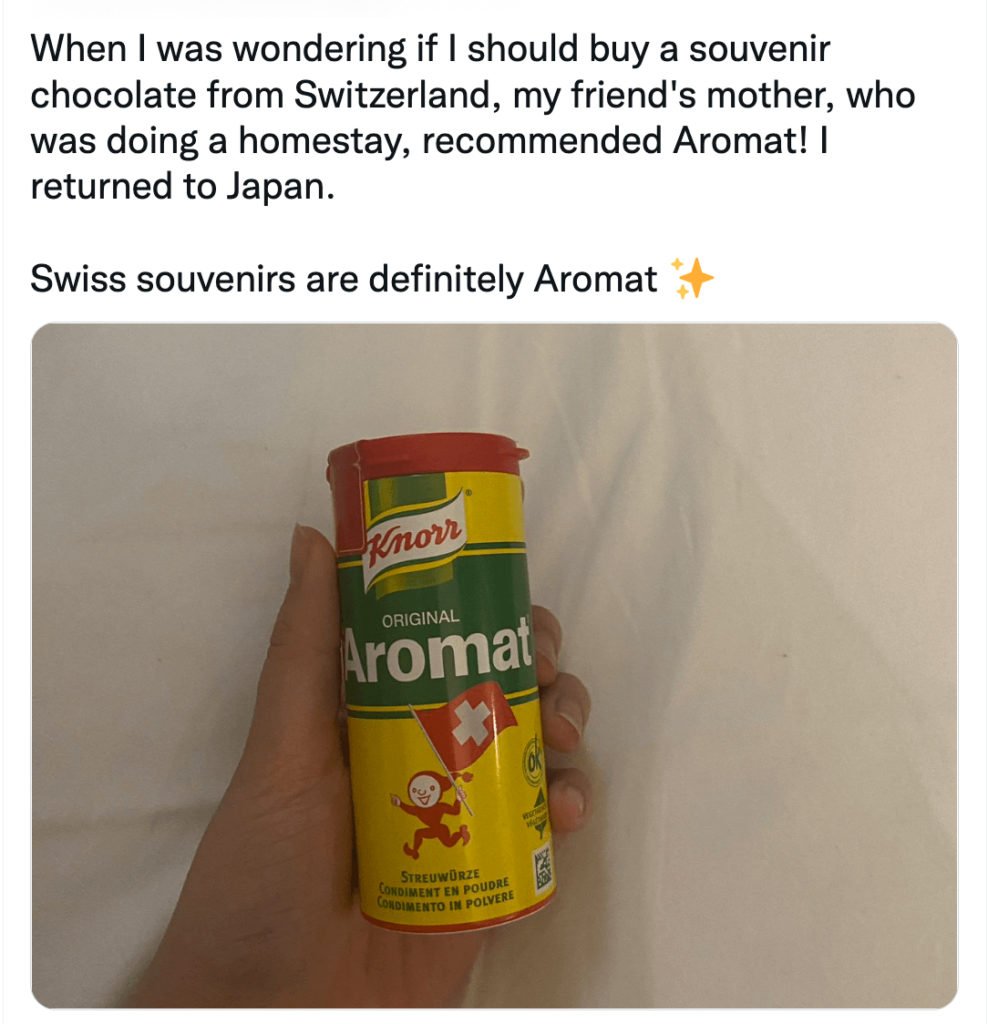 Is the best souvenir from Switzerland Aromat? Photo: @misolife_ / Twitter

But how did the perfect blend of herbs and spices made its way into Swiss people’s hearts?

Founded in 1838 by Carl Heinrich Knorr in Heilbronn, Germany, it would take Knorr until the summer of 1907 to find success in Switzerland. On July 1st that year a small workforce moved into their new workplace in a former shoe factory in Thayngen.

Since Knorr's supply chain was no longer guaranteed during the Second World War, Knorr Thayngen saw this as an opportunity to become completely independent and focus entirely on the needs of the Swiss people.

From the very beginning, Knorr has played a major role in the development of the Swiss food industry and eventually found its first real success with the “Soup Miracle” – an instant soup so yummy it tasted entirely homemade. Needless to say, the Swiss were hooked.

With the magic soup accompanying the Swiss through the War, Knorr decided to revolutionise the Swiss spice market.

Thus after a team of staff spent months of travelling to research spices, regional taste preferences and herbs Aromat was born in 1952.

The new product, developed by 30-year-old Walter Obrist, had everything the Swiss taste buds desired: a strong flavour, natural ingredients, and managed to emphasise the natural taste of what the customers cooked up without changing the dishes’ colour.

After initially tentative selling it in the form of soup cubes, Knorr came up with an ingenious advertising strategy: in 1953, the food giant invented the happy-go-lucky mascot Knorrli to attract customers and launched a new practical shaker tin to boot.

Within ten months, 80 percent of the population were familiar with Aromat and that at a time when communication channels were significantly less efficient than today.

To drive sales, the company gave away 30,000 shakers to restaurants and canteens where they are still among the staple spices on display today – just like in Swiss households.

Aromat is still one of Switzerland’s most successful products and a notable export success. It's popular throughout the country and appears in the directory of Swiss food products via Patrimoine Culinaire Suisse.

Though the recipe for Aromat has – believe it or not - never been revealed, it has largely remained unchanged since the 1950s. Inside the yellow tin with the red lid are yeast extract, wheat glutamate, vegetable fat, vegetables, spices, and salt.

Although Aromat was originally called “Pflanzenextract,” which means plant extract in German. Perhaps it's no surprise that this name was dropped in the 1950s

How is it eaten?

Well, that is entirely up to you and habits wary even among the Swiss. So, whether you like your Aromat in the morning with some boiled eggs (a Swiss favourite!), prefer it over some potatoes for dinner, or just like it paired with raw buttered bread, cucumbers, or tomatoes as a snack throughout the day, it is sure to make every bite feel like home.

Remember, there is no wrong way of sprinkling Aromat over your favourite dish – but a small tip for newcomers, when it comes to Aromat, less is often more.

It's also loved in South Africa, where people are often surprised to find out it's actually Swiss.

So, what’s with the love?

What exactly is behind Switzerland’s nearly 70-year love affair with the delicious seasoning in the yellow tin may be one of its better kept secrets and entirely down to the individual, but one thing is for certain: the Swiss are loyal to the recipe.

In fact, many have tried to emulate the best-seller, such as Maggi with its copycat creation of Fondor, as well as Hügli (Picanta), Oswald (Aromix) and even supermarket chain Migros (Mirador) – but none are a match for Aromat which still reigns supreme in Swiss households knocking out its competition one by one, year on year.

Perhaps the saying really is true: the best way to a Swiss person’s heart is through the stomach - and Aromat just has the magic formula.