A strike disrupts rail traffic between Geneva and France; more expensive property prices in nearby areas; and other news from Switzerland's second-largest city.

All Geneva-Paris TGVs will be canceled on Thursday

Strikes in France on January 19th against the proposed pension reform will impact rail connections with Switzerland as well.

Starting tonight and throughout Thursday, all TGVs on the Lausanne-Geneva-Paris line, in both directions — a total of 16 trains — are canceled, according to train operator Lyria.

Tonight, the Paris (Gare de Lyon)-Geneva-Lausanne trains at 6:18 pm and 8:18 pm will not be running. The same applies to the Lausanne-Geneva-Paris connection at 7:45 p.m.

The Léman Express between Geneva and Annemasse in France will be as disrupted as well, impacting hundreds of cross-border workers who use this train daily to travel to and from their jobs.

More information about alternate connections can be found here. 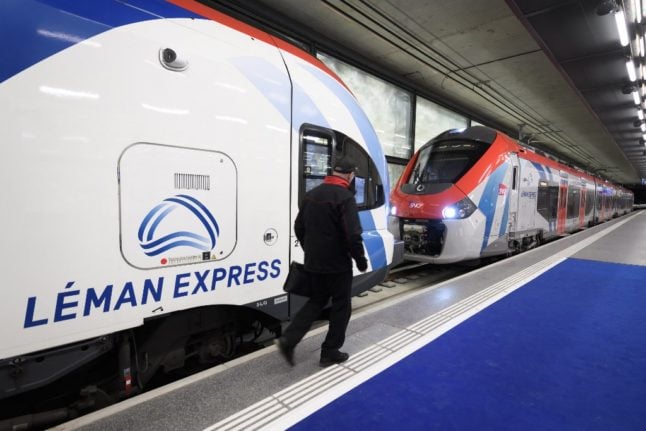 Traffic to and from Geneva on Léman Express will be disrupted. Photo by Fabrice COFFRINI / AFP

Property prices in neighbouring French regions are no longer cheap

For years, real estate prices in French border areas were lower (and sometimes by much) than properties in Geneva, where housing market is notoriously expensive.

This difference in price made border communities attractive to buyers from Geneva.

However, while properties in France are still cheaper than in the Geneva area, the gap is closing: in 2022, houses and apartments in Haute-Savoie have increased by 8.6 percent. and in Ain by 7.3 percent over the 2022 prices.

Prices are the highest in French “commuter” towns of Divonne-les-Bains and Ferney-Voltaire, which are only minutes from Geneva.

The same phenomenon extends to rents, which are higher in parts of France that are closest to Geneva.

So is it still worthwhile for Genevans to purchase property in France?

However, they should be willing to “to move away from the regions located near the Swiss border, towards areas farther away, where prices are more affordable,” he told Tribune de Gèneve.

READ MORE: How the Swiss city of Geneva impacts rent prices across the border in France

Now that the winter weather is finally here, and snow has fallen in the mountains at last, you may want to go skiing again.

No need to venture far: there are some family-friendly slopes right at Geneva’s doorstep.

However, given Geneva’s geography,  they are all located on the French side of the border:

Les Brasses, only 37 km from Geneva in Haute-Savoie, offers 30 km of slopes.