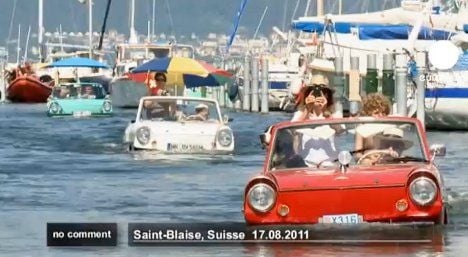 You can describe these vehicles as real off-roaders — not only do they drive well on land, they also travel perfectly in the water.

Fitted with colourful sun umbrellas and decorated with flags, a motley crew of vehicles carrying families — including babies and dogs — drove off the port and glided smoothly into the water, before moving across Lake Neuchatel.

For many of these enthusiasts, it is the dual-function of the vehicle that has drawn them.

“It’s a classic car as well as a boat, so it has more than one use, which makes it more appealing,” said Briton Paul Foley.

“I’m predominantly car orientated. I like cars, I don’t like boats, but it just gives it a whole new level that you can use the water as well,” he said.

Foley was driving an amphicar, a 1960s German-built cabriolet which was also the only civilian amphibious vehicle to be mass produced. Nevertheless, only 3,878 were ever manufactured.

Besides the amphicar, the Germans also manufactured the amphi-ranger, a 4×4 in the 1980s, while the French built the hobbycar in the 1990s.

But Patrick Amerijckx’s favourite vehicle is still the military Dukw truck — 21,147 of which were produced by the US army during World War II.

Amerijckx, who had travelled 14 hours in the Dukw from Belgium to join in the Swiss gathering with his wife and two teenage children, said “in the beginning we just drove it like a truck, we brought it to exhibitions.”

“But one day we had the opportunity to go into the water, and we saw that it was really great. We have a particular view, we can do things that others can’t and it’s great. We feel free,” he told AFP.

These days, Amerijckx, who owns four amphibious vehicles, brings his carriers into the water five or six times a year, and meets annually with the group of enthusiasts in a different European country.

Since 1987, the group has met in various locations, including Sweden, Italy and Germany. In 2012, they will head to Norway.

This year it is Switzerland’s Lifeguards Club of the Low-Lake which is hosting the group as part of St Blaise village’s 1,000 anniversary celebrations.

After three days of touring lakes Neuchatel, Bienne and Morat, the group will on Saturday also take members of the public out for a ride in the water.

For Frenchman Christophe Prier, it is precisely the social aspect that he enjoys about his amphibious vehicles.

He uses them all year long “be it to drive friends or family around, or to participate in such public events where we find ourselves among those who are passionate about such vehicles.”

“We share a common passion, and contrary to other passions, the amphibious vehicle is not selfish, we can allow others to enjoy it as well. There is sharing involved. That’s what I love,” he said.