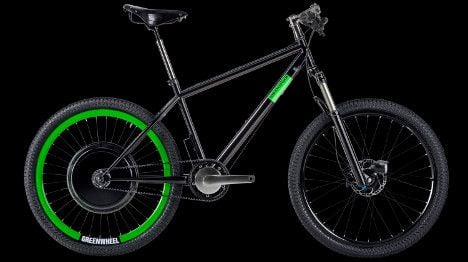 The bike can detect nearby friends via geo-positioning satellites, while also making real-time recommendations for routes with better quality streets, cleaner air and less pollen.

There is also a road race function: the cyclist can define a track and dare other cyclists to challenge best times and beat old speed records.

The futuristic bicycle is the result of research by Butch Gaudy, founder and chief designer at Swiss bicycle manufacturer MTB Cycletech, and Michael Lin, a scientist at the Massachusetts Institute of Technology (MIT).

The inventors said they wanted to create a “quick, quiet and effortless“ e-bike that would run on a platform to which new functions and apps could easily be added.

Gaudy and Lin explain that the e-Jalopy GreenWheel can communicate in real time with the owner’s smartphone, answering pertinent questions such as: “How many calories have I burned?”, “Where are my friends?” and “Where did I leave my Jalopy last night?”

The GreenWheel in the bicycle’s name refers to an oversized rear wheel hub attached to the e-bike. An engine in the hub includes a battery, motor, Bluetooth interface and the electronic controls needed for hybrid bikes that can be pedalled or driven by motor.

The developers say GreenWheel technology can be built into almost any bicycle without the need for extra electronics or cables, making it possible for any bike to become an e-bike.

The developers argue that eJalopy could even make calculations that will help save money – it informs the cyclist how much fuel was used and how much CO2 the same journey in a car would produce. The e-bike charges in 90 minutes and should be available to buy in 2012.

The eJalopy is expected to retail for an initial minimum price of €3,050 ($4,300), magazine Der Spiegel reports.

Gaudy and Lin are presenting the e-Jalopy GreenWheel at the Eurobike 2011 exhibition in Friedrichshafen in Germany, which runs until September 3rd.