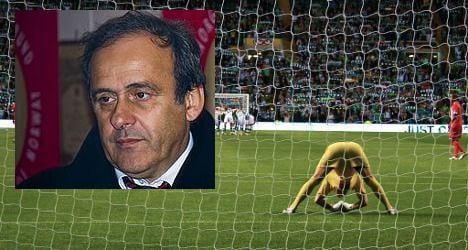 Wearing a suit, Platini arrived by foot at Canton Vaud’s prosecutor’s office without making any comments to the media.

UEFA communications director Alexandre Fourtoy meanwhile said that the meeting between the prosecutor and Platini will be held behind closed doors.

FC Sion president Christian Constantin also arrived at the same location Wednesday morning, without making any comments to the media.

The Swiss football club has taken UEFA and FIFA to several regional courts in Switzerland after it was thrown out of the Europa League for fielding ineligible players.

No charges have been made against Platini, but he is to answer as to how the league games are organised and the importance of regulations in sports.

UEFA secretary general Gianni Infantino is also expected to be heard by the prosecutor.

A Vaud cantonal court had earlier ordered UEFA to reinstate FC Sion to the league. In case of non-compliance, the football body would be fined.

But UEFA has until now not complied, as it waited for a decision from world sports’ top court CAS, to which FC Sion would not pose its appeal.