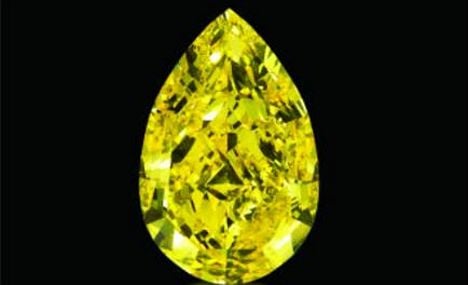 “Ten million francs. Sold!”, Sotheby’s David Bennett said before about 150 people gathered for the sale at a luxurious Geneva hotel.

“It’s an absolute record for a yellow diamond,” Bennett told journalists after the sale. “It is a spectacular, unique stone.”

He said the buyer was an “anonymous individual” who made the winning bid over the telephone.

The sale price was slightly less than the estimations of experts who had valued the yellow diamond at between 11 and 15 million dollars.

Gemologists have certified the pear-shaped jewel as “Fancy Vivid Yellow”, the rarest and most desirable colour for a yellow diamond, Sotheby’s said.

The gem was discovered in South Africa in 2010 and wowed visitors to London’s Natural History Museum where it was displayed earlier this year, and also in Hong Kong.

The yellow diamond, about the size of a woman’s thumb, takes its colour from traces of nitrogen in its carbon makeup.

“Every time we’ve shown it around the world, people have gone ‘oh my god’,” Bennett, head of jewellery for Europe and the Middle East, told AFP last week.

“It has never been owned so the buyer will be the first person to wear it,” he added.

The sale price did not include commissions.