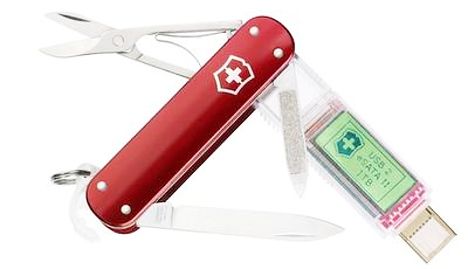 A USB drive capable of holding as much as a terabyte of data is folded into a Swiss Army Knife being shown-off at the Consumer Electronics Show that officially opened its doors on Tuesday in Las Vegas.

“It fits in the palm of my hand,” Victorinox spokeswoman Renee Hourigan said as she cupped in her palm a one-terabyte drive sheathed in the Switzerland-based company’s iconic red casing.

“You can transfer everything to this and then throw your computer’s external hard drive out the window,” she quipped.

The terabyte-capacity version will be released globally by August and be priced at $3,000, according to Victorinox.

Drives come with red and black casings. The red one has a blade, scissors, and a nail file while the black one lacks those accessories in order to avoid clashing with air travel security rules.

Knife parts and engineering come from Switzerland while the electronic components are made in California.

“We’ve had them go through the washer, the drier; run them over with cars and they still work,” Hourigan said. “It’s as high quality as it can be.”

Slim knife drives self destruct if they sense hackers trying multiple passwords or other “brute force” attacks to break in.

“If it realizes there is software actively trying to get into it, it will destroy itself,” Hourigan said. “It fries the chip with too much current under a brute force attack.”