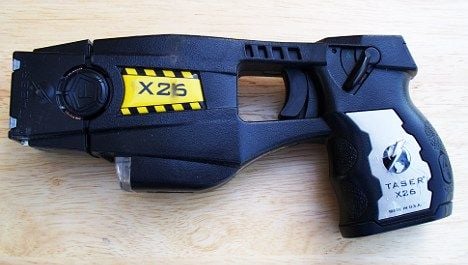 The trend is steadily rising, with thirteen, seven and eight cases recorded in the years 2007 to 2009. Overall, the gun has been used 70 times since its introduction in Switzerland.

Unlike the United States, where tasers can be carried legally in 43 states without a permit, use of tasers in Switzerland is restricted to use only by police and border guards.

In over half of the cases reported in Switzerland last year, the targets were described as being emotionally disturbed. The rest of the numbers were made up of individuals under the influence of either drugs or alcohol.

Amnesty International has voiced concern over the use of taser guns, in particular against the emotionally disturbed, NZZ reports.

The organisation maintains that tasers should only be used when any other weapon would be used.

In half of the cases, the taser was used to still physically violent and aggressive individuals.

Only one person is recorded as being injured in 2011. These injuries were sustained when the recipient fell from the force of the shock.

"After an interruption of around 24 hours, Block 2 of the Beznau nuclear power plant will start producing electricity again tonight," operator Axpo said in a statement.

The company explained that "a defective safety switch in the non-nuclear part of the plant" had caused the automatic shut-down late Wednesday.

The erroneous triggering of the switch had halted the flow of water into the steam generator, which had caused the reactor to shut down, the company said.

"The fault was rectified by activating an identical reserve switch," Axpo said, stressing that an inspection showed that all the components affected by the defect were now functioning well.

Under current plans the country's five reactors will be put out of action by 2034.