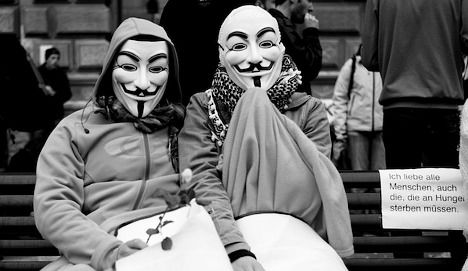 Activists responded to a call by one of the Zurich movement’s leaders, Ueli Hemp, to meet at the front of the stock exchange building at one o’clock on Saturday.

Hemp explained to the media that he had chosen to demonstrate outside the stock exchange because the Occupy movement was also against commodity trading, one of the stock exchange’s main activities, newspaper Tages Anzeiger reported.

Demonstrators came with flyers and chairs, musical instruments and chalk. One wielded a large paper pig with the words “Too pig to fail” inscribed on it, and another drew a picture of a fat banker on the pavement.

As the afternoon wore on, participants decided to set up their new camp at Bürkliplatz. But at least 80 police in masks and protective gear were waiting for them when they arrived, making it clear that the group would have to move on.

The activists then worked their way around the lake to the Rote Fabrik, an arts and cultural space at Zurich Wollishofen. It is not clear how long the group will be welcome to stay here.

This is the first time that the Occupy protestors have met since early December, when their last camp was broken up. The group originally formed in October last year, with up to 1,000 demonstrators gathering in Paradeplatz, Zurich’s financial heart.