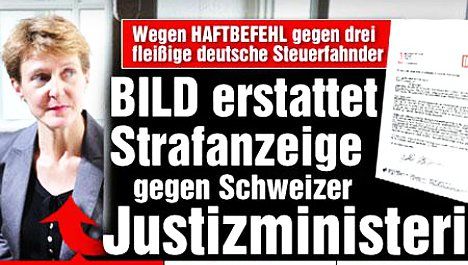 A long-standing spat between Switzerland and Germany flared up again last week when Berlin said a proposed double-taxation deal could not pass its parliament in its current form.

It then emerged over the weekend that Swiss authorities had issued an arrest warrant for three German tax officials over the purchase of a CD naming German customers of Credit Suisse bank who had allegedly dodged taxes.

This enraged Bild, which has filed a suit against Justice Minister Simonetta Sommaruga for attempted false imprisonment, coercion and complicity to tax avoidance.

The Swiss authorities have taken aim at German tax officials “who were just doing their job,” Bild said, also criticising Switzerland for “standing by for decades as tax evaders stash away millions in their country.”

Meanwhile, a spokesman for the German finance ministry said that a deal including an “additional protocol” to ease parliamentarians’ concerns could be signed in Switzerland on Thursday.

The spokesman said he was confident the new double-taxation deal, which has become an issue ahead of a poll next month in Germany’s most populous state of North Rhine-Westphalia, would win parliamentary approval and enter into force in January.

German Finance Minister Wolfgang Schaeuble on Tuesday tried to calm the row, saying: “It makes no sense for us in politics to start attacking each other over Switzerland as if it weren’t a state based on the rule of law or as if it were some banana republic.”