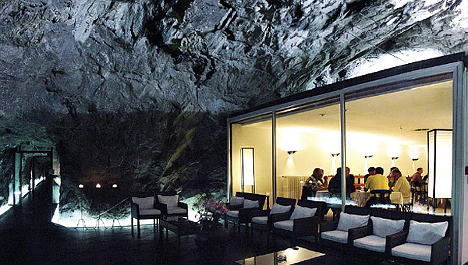 The auction was held on July 10th in Biasco in the canton of Ticino and was poorly advertised, online news site Le Matin reported.

Lucia Filippi, the new owner of the La Claustra hotel, said he attended the auction without any intention of purchasing the property. When the auction had eventually kicked off with a call for an opening bid of 1,000 francs ($1,023), he timidly put up his hand and was entirely amazed when no further bids followed.

There were several blunders at the auction. First, another party who wanted to make an initial bid of 100,000 francs ($102,294), suddenly realized he had no money or cheque book with him. Then, because of a procedural mistake, the auction had to be started once again.

“I do not understand why the hotel has gone so cheaply,” Paolo Minotti, secretary of the Ticino section of the Swiss Heritage Society told the website.

The unique hotel is a conversion of an underground artillery fort at the heart of the Gotthard. Some 250 metres underground, the stunningly situated luxury hotel consists of 17 rooms, a restaurant, library, spa and swimming pool, as well as 4,000 square metres of conference space, Le Matin reported.

The hotel, designed by Jean Odermatt as a kind of meditative post-modern monastery, was opened in 2004 after private investors and the Swiss state invested 4 million francs ($4,092,400) to carry out the necessary works.

The hotel was declared bankrupt in 2010 due to insufficient visitors and high operating costs. The electricity bill alone came to 60,000 francs ($61,373) a year.

Filippi has confirmed that he has already had several offers for the hotel. It is not yet clear what he intends to do with it.