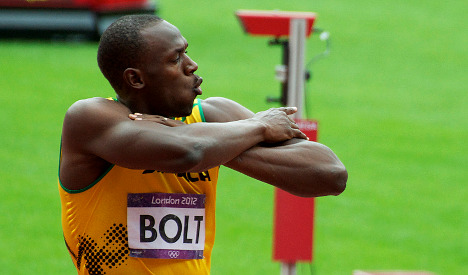 Bolt, who defended his 100m, 200m and 4x100m relay titles in London, is due to contest the 200m in Thursday's Diamond League meeting in Lausanne, while Blake, who won silver in both individual sprints, will run in the 100m.

The training partners — gold medallists in Jamaica's world record-breaking 4x100m relay squad — will race over those same distances in the next meeting in Zurich on August 30th, before swapping for the Brussels event on September 7th.

Asked about the possibilities for a rematch between the pair and his desire to test himself against his elder rival, Blake said: "Yes, I always love running against him. But ask my manager, who really knows the business."

Seegobin said: "Coach (Glenn) Mills gives Yohan a programme and it's tailored according to people's wishes. It's something for the managers, the meeting director and sponsors.

Even if Zurich attempted a rematch, Seegobin said he did not see much point after the Olympics, which was the high point of the season, while the two sprinters had already faced off in the Jamaica national trials in June.

Seegobin also said that the effects of Blake's warm-down after London should not be under-estimated.

As such, a race between the pair looks more likely next season.

"My objectives at the end of this season are to continue to run well, improve technically, and not get injured," said Blake.

Bolt insisted that he is not thinking about a new 200m world record, which he currently holds, having stormed to 19.19sec in Berlin in 2009, when he races on Thursday.

"Sure, I have the potential on this track if I am in form and if the conditions are right," he said.

"But my main objective is to give this enthusiastic crowd a show."

In the meantime, there has been talk of both men playing cricket in Australia's Twenty 20 Big Bash League after Bolt expressed an interest in turning out for Melbourne Stars and the Sydney Sixers said they hoped to lure Blake.

Both men are cricket fanatics and Bolt played junior cricket before turning to the track, while Blake describes himself as a "bowling machine" in the finest tradition of West Indian fast bowlers.