The oddball accident occurred on Thursday around 7.30am after the 60-year-old bus driver stepped out of the articulated vehicle to open a door that had been blocked by several students, cantonal police said.

The articulated bus, at a bus stop on a road sloping downhill, moved 20 metres and ploughed into the side of the barn, becoming embedded in the wood building, police said.

The reason why the bus moved is still being investigated.

Around 30 of the students were treated at the site of the accident by paramedics, while ambulances took 12 more suffering from minor injuries and shock to local hospitals, police said.

The school bus was transporting the children, aged 13 to 15,from the surrounding region to a school in Farvagny, a town in the centre of the canton, midway between the cities of Fribourg and Bulle.

Students unharmed by the incident were taken in a second bus to the school, which was aided by the canton’s psychological support centre, police said.

It took about five hours for experts to extricate the bus from the barn, which was cordoned off for security reasons.

Because of the damage caused a person renting lodgings in the building had to be rehoused, police said.

No damage estimate was immediately available.

An investigation is continuing into the crash. 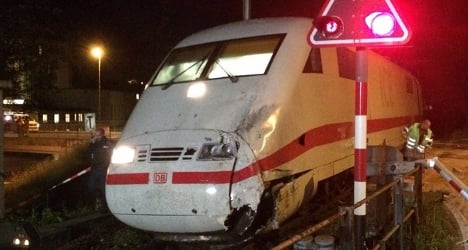 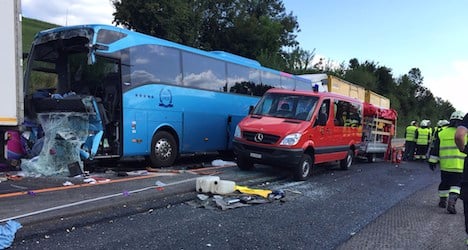 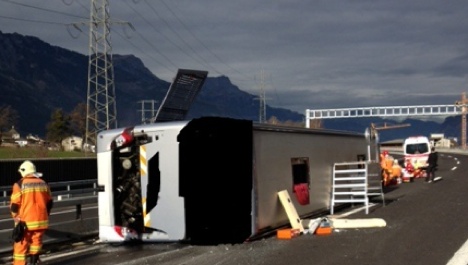 All 12 passengers, including members of the group, were injured but none of their lives were in danger, Uri cantonal police said.

The accident occurred between Erstfeld and Altdorf at around 11am when the bus, carrying two drivers and 11 band members, flipped on its side for reasons not immediately known.

The bus, equipped with sleeping berths, was taking members of the band from Monaco to Hengelo in the Netherlands, police said.

No other vehicle appeared to be involved in the crash.

The injured passengers were transported to the Uri cantonal hospital, as well as other medical facilities outside the canton, police said.

In addition to police, fire fighters from Altdorf, the Rega emergency rescue team and ambulances from Uri and Nidwald responded to the accident scene.

Precise information about injuries Miller, 53, suffered were not immediately available.

The Grammy Award-winning bassist is known for his work with such other jazz giants as Miles Davis and Herbie Hancock.

He recently performed in Zurich for the jazznojazz event on November 1st.

In the last entry on his website, Miller writes about taking a few days off before a scheduled performance in Monte Carlo on Saturday, from which the band members were evidently returning. 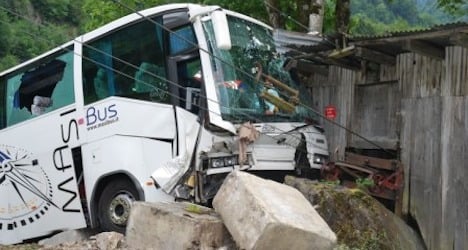