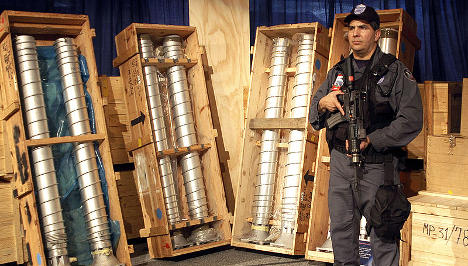 Gas centrifuges for uranium enrichment intercepted en route to Libya in 2003 (Photo: US Department of Energy)

The case began in the 1990s, when Friedrich Tinner, 70, and his two sons Marco and Urs started working with the global nuclear smuggling network of Abdul Qadeer Khan, the so-called father of the Pakistani atom bomb, who supplied Libya with nuclear weapons technology.

Swiss prosecutors launched a case against Marco, 43, and Urs, 46, in October 2004 and their father the following year, charging them with offences under the War Material Act.

On Monday, prosecutors asked the Swiss Federal Criminal Court to hand Marco Tinner 41 months in prison, his brother 50 months and their father a 24-month suspended sentence.

But thanks to a plea bargain they will be allowed to walk out of the court free men based on their time spent in custody awaiting trial.

The two brothers languished for three and four years in jail, respectively, awaiting trial, while their father was incarcerated for nearly two years.

The court is expected to issue its decision on Tuesday afternoon.

The strange case was the subject of a book published last year by two US journalists, Catherine Collins and Douglas Frantz, called "Fallout", which tracks the way the United States secretly penetrated Khan's network to prevent Libya and Iran from obtaining nuclear secrets.

Newspaper reports claimed that after developing links to Abdul Qadeer Khan, the Tinners were recruited by the CIA.

In 2008, Urs Tinner's lawyer said that the family had received one million dollars from the CIA in exchange for their cooperation.

In 2007 the Swiss government ordered that material seized in the course of the investigation be destroyed to stop nuclear weapons plans falling into hostile hands.