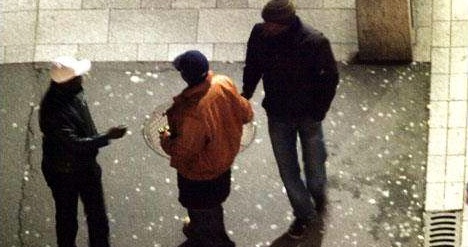 The “Stop dealers Lausanne” page invites people to provide information and photos to shine a light on a drugs scene in the Vaud capital that has raised ongoing political concerns.

The Facebook page is attracting 9,000 visits a day and gained media attention for its ability to mobilize support for petitions through photos and commentary.

The goal of the initiative is to “wake up the collective minds of Lausanne residents,” the 28-year-old creator of the page, who prefers to remain anonymous for safety reasons, told Le Matin.ch.

“I am not a racist nor an extremist nor a politician but a simple citizen who is fed up,” he said.

The page was launched in April, with internet users invited to post photos of drug dealing in their neighbourhoods.

It has succeeded in gathering two petitions, one with 736 signatures, the other with 250, seeking city hall action to deal with problems in the neighbourhoods of Tunne, Riant-Mont, Valentin and the Rue Saint-Roch.

The creator of the page said he was motivated to act after being startled to see an illegal drugs user shooting up in front of his apartment building.

His determination to do something only increased when a law enforcement official ticketed his vehicle for an infraction while a dozen dealers were carrying out their activities nearby.

The official told him he was not contracted to deal with drug issues.

“There, I told myself, we have a big problem. It was time to get people together and the best way was Facebook.”

The handling of drug problems in Lausanne has become politically charged, with the former local government member in charge of police quitting recently over criticism that he was not dealing adequately with the issue.