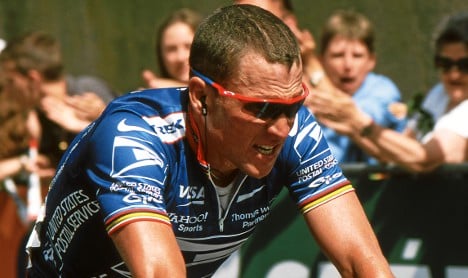 The explosive report by the US Anti-Doping Agency, released this week, outlines documented hefty payments made by the seven-time Tour de France winner to Dr. Michele Ferrari over a 10-year period from 1996 to 2006.

The information is included in a sweeping indictment of Armstrong and members of the US Postal Service cycling team for running “the most sophisticated, professionalized and successful doping programme that the sport has ever seen”.

The 164-page report is buttressed by more than 1,000 pages of documentary evidence, including testimony from 15 cyclists, most of them members or former members of the USPS team.

The USDA had earlier stripped Armstrong of his Tour de France titles, although the American athlete, famous for successfully battling cancer, rejected the claims as hearsay and refused to admit wrongdoing.

This week his lawyers slammed the anti-doping agency’s report as a “one-sided hatchet job” that rehashed “old, disproved, unreliable allegations”.

The report places Ferrari at the heart of what US Anti-Doping Agency chief Travis Tygart called a “doping conspiracy (. . .) professionally designed to groom and pressure athletes to use dangerous drugs, to evade detection, to ensure its secrecy and ultimately gain an unfair competitive advantage through superior doping practices.”

An Italian physician and cycling coach, Ferrari was banned for life ban from professional sport by the doping agency earlier this year for numerous anti-doping violations, including possession, trafficking, administration and assisting doping.

This week’s report alleges that the doctor aided Armstrong and other cyclists by promoting forms of doping that included injections of cortisone, testosterone and the blood hormone EPO, as well as blood transfusions.

Ferrari provided advice on how to evade detection by anti-doping testers.

Armstrong paid hundreds of thousands of dollars to Ferrari, with payments to his Swiss company amounting to $475,000 in 2003 alone.

“The evidence is overwhelming that from 1999 through 2005 Michele Ferrari played a major role with the US Postal Service/Discovery Channel team and in Lance Armstrong's doping programme," the report says.

Armstrong announced he was suspending professional contact with Ferrari in 2004 when the doctor was convicted by an Italian court for supplying cyclists with banned substances, including EPO.

Yet the athlete paid Ferrari’s Swiss company $100,000 for services the following year, in 2005, when he won his seventh Tour de France title, the report says.

However, Ferrari's Italian conviction was overturned on appeal in that year.

The USADA report was also critical of the role of the Swiss-based International Cycling Union (UCI) for failing to investigate claims of doping made against Armstrong.

It noted that UCI dismissed a 2010 email from US rider Floyd Landis making such charges as “libelously false” and not meriting further investigation.

The cycling organization later sued Landis and earlier this month a Swiss court found him guilty of defaming the organization.

The UCI, based in Aigle (canton of Vaud), acknowledged the US report in a brief statement.

Cycling’s governing body said it “will examine all information received in order to consider issues of appeal and recognition, jurisdiction and statute of limitation, within the term of appeal of 21 days, as required by the world anti-doping code."