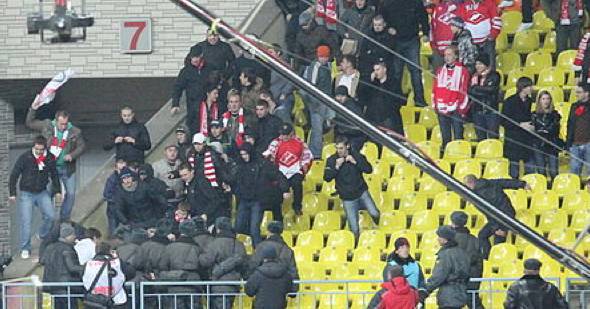 The decision was officially made public on Tuesday by the conference of cantonal justice and police department directors.

The new zero-tolerance rules will take effect starting in June 2013 for the first football matches in the Super League, the conference said in a statement.

The action follows an agreement in February by the cantons to ratchet up measures against violence in Swiss sports stadiums, particularly those fueled by booze.

The cantons of Saint Gallen and Appenzell-Inner-Rhoden already have the power to ban the consumption of alcohol at football and hockey games where security is an issue.

Parliaments in Lucerne, Uri, Neuchâtel and Zurich have already passed the needed legislation while other cantons are in the process of doing so.

A system of green, yellow and red warnings will be used to identify matches of low, medium and high security risk with evaluations made as soon as fixtures are available.

For low-risk games, electronic checks of spectators will be made at turnstile entry points to stadiums to ensure that identified “hooligans” are not allowed in.

A Swiss database contains the names of more than 1,000 people who are banned from sports stadiums because of past behaviour.

The conference said access to stadiums of intoxicated supporters will be “systematically refused”.

The police and justice department directors noted that alcohol is a “determining factor” in violence that occurs in sports stadiums, accounting for the overwhelming majority of physical altercations.

The conference defended the continued sale of alcohol in VIP sections even for high-risk matches because this has “never caused a problem”.

It also offers guidelines on transporting fans, requiring special trains or buses for fans of visiting teams in high-risk matches.

Stadiums use fixed video surveillance cameras as a standard security measure but portable cameras will also be used for medium- and high-risk games.