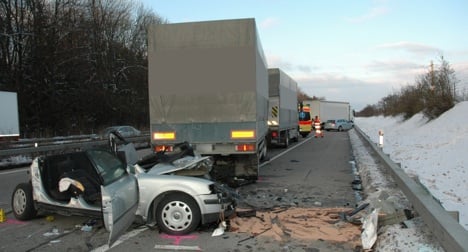 The pileup occurred shortly before 2.15pm near Utzenstorf in the canton of Bern, cantonal police said.

It is not clear from the initial police report how the accident occurred and its causes remained under investigation late Tuesday.

A seriously injured man was taken to hospital where he died shortly afterwards from his injuries, police said.

His age and identity were not immediately disclosed.

Four other people — two of them with serious injuries — were taken to various hospitals.

In addition to cantonal police, staff from the Bern fire department and six ambulances responded to the accident, while staff from a care team were on hand.

Two helicopters were called to transport the injured.

Traffic was diverted as officials blocked the highway until 7 pm, according to media reports.

Elsewhere in the country, a 41-year-old man from the canton of Fribourg was killed in a two-car collision on Tuesday morning on a road between Avenches and Villars-le-Grand in the canton of Vaud.

A 32-year-old woman, also from Fribourg, lost control of the car she was driving toward Villars-le-Grand and slammed into a car driven in the opposite direction by the man who died, cantonal police said.

His passenger, a woman aged 43, and the other driver had to extricated from the crumpled wrecks by fore fighters before being flown by helicopter to different hospitals for treatment of serious injuries, police said.

The road was blocked to traffic from 8.15am to 1pm.